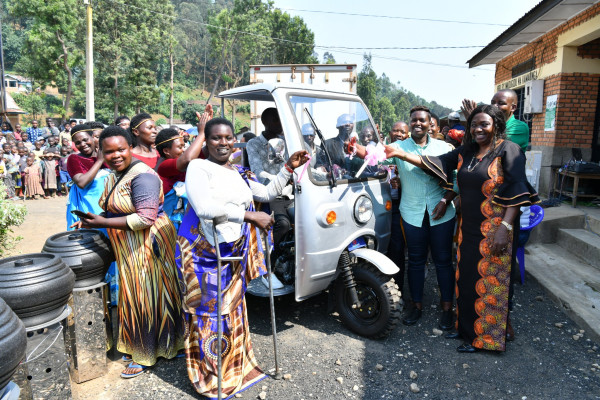 Globally, women and girls shoulder a disproportionate share of care work that is unpaid, unrecognized, and undervalued. According to a recent baseline study by UN Women Rwanda on unpaid care work in eight districts, on average women work for around 4.1 hours per day compared to men who on average do approximately 1.7 hours on unpaid care and domestic work, particularly those in areas with limited access to regular basic services such as energy, water, and sanitation.

According to the study, major burden for rural women represents finding firewood and cooking. One solution is a stove known as Save80, that saves up to 80% more energy than the normal charcoal stoves using small wood sticks as fuel for cooking.

Care work relies on the responsibilities of women in the households and hinders them from working to their full potential.

The kits worth 40,000,000 Rwandan francs ($40,000) included improved cooking stoves, heat retention cookers, a food flask known as the ‘wonderbox’ that keeps the food warm all day, sprayers, water tanks, harvesting crates, and motorcycles  and were distributed among  472 cooperative members in Rubavu District and 300 members in Musanze. The trimotor cycles will help to transport vegetable productions from farm to market and ultimately reduce domestic care work, conserve natural resources, and save cooking time for women who were already spending a lot of time doing household chores.

“We hope the kits will be used to improve your wellbeing. We encourage you to work together, save, invest, and do awareness raising to encourage other community members to join the cooperatives for collective gains,” said Ms. Kem.

Marie Louise Mukamanzi, a mother of seven, was very happy to receive the energy-efficient stove and wonderbox which keeps the food warm for her children when they return from school without her warming it again. “I am happy to receive the stove because it will reduce the long hours I spend looking for firewood and cooking,” said Mukamanzi.

The Mayor of Musanze District, Janvier Ramuli while officiating the distribution event applauded UN Women and RDO for developing such a project that will help women with the burden of gathering firewood and cooking for long hours while at the same time cutting down trees for firewood which cause climate change and other climate stressors.

Mr. Ramuli applauded the focus of the project to support women by having more time to think and undertake income-generating activities to uplift their families.

“In Musanze alone, 316 families received energy efficient kits and other 65 families will be given water tanks per family. This will empower women by removing impediments to their economic empowerment,” said Diana Mugwaneza, Programs Officer, RDO.

Nturanyenaba Consolee from Nyakiriba, Rubavu district, who was widowed 32 years ago and lives with a permanent disability and visual impairment due to a fatal motor accident told us that it was difficult for her to collect firewood and fetch water. “The energy kits come as a solution and relief for me in my old age and limited resources, thanks to UN Women’s support,” she said.

Iyandereye Clarisse, President of Kobinya cooperative in Nyakiriba, Rubavu district expressed her gratitude and that of members who received the cooking stoves saying that “I will now be able to attend meetings and cooperative programs because of the time saved”.

“Some men were also given energy-efficient kits to be ambassadors in changing the mindset that home care work is not meant for only women, but men should also support their partners and recognize the hard work they endure,” said Kazuba.

The unpaid care work is funded by the High Commission of Canada and is implemented in 8 Districts Musanze, Muhanga, Rubavu, Kirehe, Ngoma, Gasabo, Nyaruguru, and Nyarugenge.

Beneficiaries of the energy-saving kits include those living with disabilities in vegetable production in the Rubavu district which has a big number (80%) of women in cross-border trade.

Distributed by APO Group on behalf of UN Women - Africa.

:Dubai:Pakistan supporters cheer for their team during the T20 cricket match. #Gallery

Only legal loans apps to be hosted on app stores, says Centre