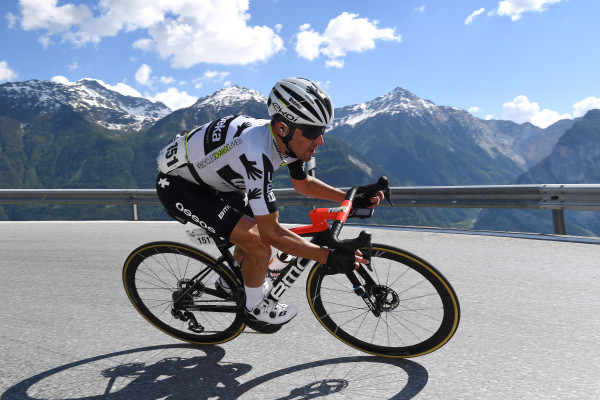 Stage 5 of the Tour de Suisse was a tough 175km mountain stage, which concluded with a summit finish to Leukerbad. The early racing saw a 4-rider break go clear but it was always going to be the final 30km where the race for the stage & GC battle would commence in earnest.

The break was caught ahead of the two tough finishing climbs of Erschmat and & Leukerbad, respectively. Team Qhubeka ASSOS was looking after Pozzovivo for the climbing finale and did well to move him up near to the head of the GC group at the foot of the penultimate climb.

The Tour de Suisse is the first race back for Pozzovivo, after being forced to abandon the Giro d'Italia this year after a nasty crash on stage 6 of the Italian grand tour. While the Italian climber was unfortunate to lose some time in the rain-soaked stage 3 of the Tour de Suisse, being caught behind a split on the descent, he certainly bounced back today.

Cresting the penultimate climb with just 15 riders remaining up front, Pozzovivo was putting up a strong fight riding among the race favourites. The final 7km ascent saw Carapaz attack from the Pozzovivo group, crossing a small gap to Jakob Fuglsang (Astana).

As a few riders would falter in the chase group, Pozzovivo and 5 others pushed on, trying to limit the gap to the leading duo. In the end, Carapaz got the better of Fuglsang at the line with Pozzovivo's group arriving 39 seconds later.

Domenico Pozzovivo
"Today was the first real mountain stage of the week. It was also the first day the weather changed, from all the rain we have had, today it was quite hot. The feeling for me was much better, I could stay with all the top GC riders and only two guys were in front of us at the end. I am happy with my shape and feel a lot of confidence that we can do something over the next three days."
Distributed by APO Group on behalf of Team Qhubeka ASSOS.

We achieved our first major win in 2013 when Gerald Ciolek won Milan-San Remo, one of the five Monuments of cycling. We have competed in six Tour de France’s and notched up 7 stage wins, with Mark Cavendish wearing the coveted Yellow Jersey at the 2016 Tour de France.

We are a multicultural, diverse team with bases in South Africa, the Netherlands and Italy. There are 19 nationalities represented across our World Tour and continental feeder team rosters. Our focus on developing African cycling has resulted in more than 55 riders from the African continent be given the opportunity to race on the world stage, since the team's inception.

We race to help people to move forward with bicycles through our relationship with Qhubeka Charity. Through our work with Qhubeka, we have contributed to the distribution of over 30 000 bicycles in communities in South Africa.

About Qhubeka:
Qhubeka is a charity that moves people forward with bicycles. People earn bicycles through our programmes, improving their access to schools, clinics and jobs.

A bicycle is a tool that helps people to travel faster and further, and to carry more. In the face of extreme and persistent poverty, bicycles can change lives by helping to address socioeconomic challenges at the most basic level – helping people to get where they need to go.

All images attached to the press release can be used with the respective image credit in combination to this release.

Kolkata: Legendary Bengali filmmaker Buddhadeb Dasgupta died at the age of 77 this morning due to age – related complications in Kolkata. #Gallery

Kolkata: Security personnel are on high alert after two history – sheeters from Punjab killed in shootout with police and STF yesterday in Kolkata. #Gallery

Kolkata: Medic administers dose of COVID – 19 vaccine to a beneficiary during Drive through By Vaccination camp in Kolkata. #Gallery