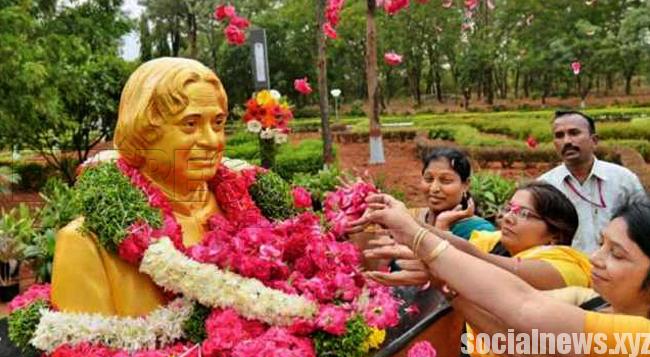 After unveiling the bronze statue to mark the late leaders' 84th birth anniversary, the chief minister paid rich tributes to Kalam describing him as India's tallest leader after Mahatma Gandhi, saying it was a privilege for him to unveil the statue of a great son of India.

He also thanked the central government for agreeing to the state government's proposal to name DRDL as Dr A.P.J. Abdul Kalam Missile Complex. Recalling Kalam's close association with Hyderabad, the chief minister said he was surprised to learn from DRDL officials that he used to live in a small room in DRDL when he served as its director here for 10 years.

KCR, as the chief minister is popularly known, referred to the contributions made by Kalam in the field of space when he served in ISRO before coming to Hyderabad. "In Hyderabad he played a key role in development of missiles and came to be known as missile man of India," he said.

Describing Kalam as a "great humanist", he said while working on missile programme, Kalam also joined hands with some hospitals in Hyderabad to use technological innovations for the benefit of poor patients.

KCR said it was due to contributions of Kalam that Hyderabad today has the capacity to completely manufacture an aircraft and every rocket sent into the space carries spares made in the city.

The chief minister said Kalam demonstrated India's defence capabilities before the world and he was rightly conferred the highest civilian award of 'Bharat Ratna' and rose to the highest constitutional post of the president.

"Even in Rashtrapathi Bhavan, he lived a simple life. After completing his term, he lives as a teacher and preacher," said KCR.

The chief minister said if he were to write a book, he would never miss the contribution of Kalam to Telangana. The Telangana Rashtra Samithi (TRS) recalled that Kalam was the first president to announce that the United Progressive Alliance (UPA) government will carve out Telangana state.