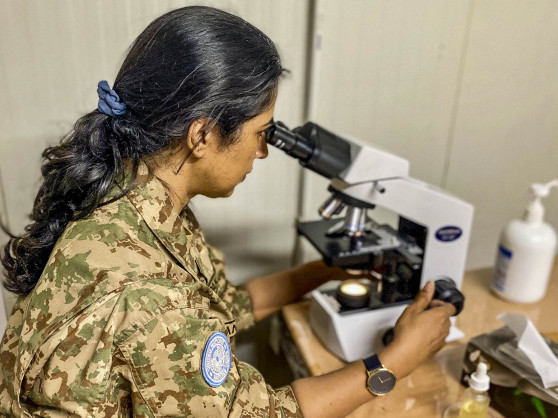 Amidst ongoing troop rotations in Mopti, women peacekeepers serving with the Pakistani contingent reflect back on their multiple achievements with pride.

Pakistan is one of the longest-serving and largest troops and police contributing country of UN peacekeeping operations. Yet in Mopti, Central Mali, this contingent contributes far more than just troops: having built up a state-of-the-art military hospital from the ground up, Pakistani peacekeepers also deliver life-saving medical assistance for Blue Helmets from every contingent that are injured serving in the line of duty, as well as Malian civilians and members of the Malian Defense and Security Forces (MDSF).

Within the Level 2 hospital —a key logistical asset for MINUSMA— Pakistani women peacekeepers are proudly at the forefront of providing urgent medical and surgical care, reflecting their country’s deep-rooted commitment to upholding women’s roles in the promotion of sustainable peace and security.

Part of the pioneering team that raised this trailblazing field medical facility from the ground up, Lt Col Ambreen EHSAN and Maj Farah Javed FAROOQI describe the honor they feel in serving humanity through serving their country.

“Pakistan has played a prominent role, especially in military medical services, and has upheld high standards of medical services for the peacekeepers as well as the civilians who are affected by the war,” explains Lt Col Ambreen EHSAN.

This is no small feat within the extremely volatile security environment in Mali. The United Nations Peace Mission in Mali (MINUSMA) is one of the most dangerous places in the world for Blue Helmets. Since the Mission was founded in 2013, more than 250 MINUSMA peacekeepers have lost their lives while attempting to bring lasting peace to the West African nation. Not only do Blue Helmets continue to be deliberately targeted by armed terrorist groups, but they also regularly face the threats posed by landmines and improvised explosive devices (IEDs) — causing life-threatening injuries that the Pakistani medical contingent is the first to treat.

Maj Farah Javed FAROOQI emphasizes that “a challenging environment like this has really chiseled and honed our professional efficacy in terms of providing medical care in the field, in terms of evacuating casualties from the field to the medical facilities safely, and then giving life-saving medical and surgical care in our hospital. In retrospect, our professional efficacy and our skills were tested time and again; however we surpassed all the challenges and played a major role in peacekeeping.”

A Steadfast Commitment to Health and Peace

Since 1960, Pakistan has contributed over 200,000 servicemen and women to 46 UN missions across the globe. The nation’s commitment to peace is evident, and Lt Col Ambreen EHSAN clarifies that this is part of its ethos.

“Ever since the inception of Pakistan, the nation has been trying to support the oppressed nations of the world.”

Maj Farah Javed FAROOQI agrees, chiming in that “our founding forefather Muhammad Ali Jinnah said” our object should be peace within, and peace without’, this is what we are striving for here and beyond the boundaries of our country.”

Throughout their year-long deployment, both women Blue Helmets have embodied these foundational values for their nation and played a central role in building lasting peace in Mali. From managing casualties to handling medical emergencies, their work has earned them the respect and trust of their patients and fellow peacekeepers.

The Best and the Brightest

The Pakistan army selects the best officers and soldiers to send on the many peacekeeping missions it contributes troops to, so the success of the Mopti military hospital in terms of client satisfaction comes as no surprise.

First-time peacekeeper Maj Farah Javed FAROOQI admits that she is leaving fully realized due to the overwhelming response of gratitude towards her team’s performance, both from patients but also from visiting dignitaries.

“Nothing makes you more content and fulfilled than to treat and bring smiles to the faces of people who have suffered and who have been wounded, physically and mentally.”

Lt Col Ambreen EHSAN concurs. “Establishing a hospital from its foundation up and building and maintaining international standards for patient care and attaining the full patient satisfaction has been our honor and pride.”

Despite their eagerness to return to their families after more than a year of rewarding service in central Mali, the duo admits a degree of sentimentality settling on the eve of their departure.

Reminiscing of her first peacekeeping experience in Mali, Maj Farah Javed FAROOQI describes her stay as unforgettable. “It’s a beautiful land, a red-carpeted land, with beautiful people, great generous hearts and soft language, and they’ve made us feel trustworthy enough to give them the best care that we could in our professional capacity.”

Washington : Nirmala Sitharaman in an event at Brookings Global #Gallery

New York: A plenary meeting of the UN General Assembly held to elect members of the Human Rights Council at the UN headquarters #Gallery

Amritsar: Fireworks at the Golden Temple to mark the birth anniversary of the fourth Sikh Guru Ramdas #Gallery

Ujjain : A Shivling replica unveiled by Prime Minister Narendra Modi at the inauguration of the Mahakal Lok corridor #Gallery