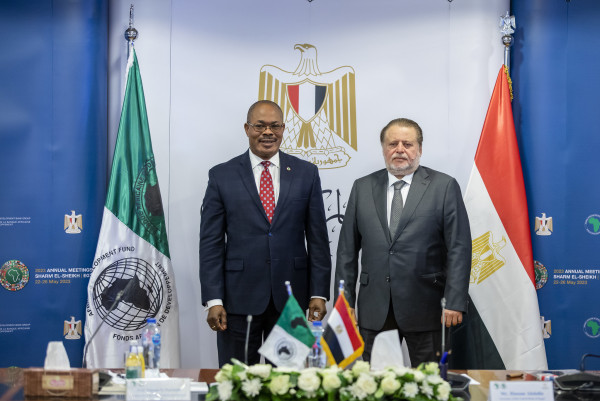 The Government of the Arab Republic of Egypt and the African Development Bank Group (www.AfDB.org) on Monday signed a memorandum of understanding on the hosting of the Bank Group’s 2023 Annual Meetings in May next year.

The Annual Meetings are the Group’s topmost statutory event. They provide the stage for its boards of governors and management to review the organization’s activities over the previous year. The 2023 meetings will also provide an opportunity for leaders to take stock of Africa’s response to the growing threat posed by climate change and the impact of the situation in Ukraine on Africa’s food security and its untapped natural resources.

The Acting Governor of Egypt’s Central Bank, Hassan Abdalla—who is the current chair of the Bank Group’s Boards of Governors—signed the memorandum on behalf of his country. African Development Bank Group Secretary-General Vincent Nmehielle signed on behalf of the institution. Also present was the African Development Bank Group’s Executive Director for Egypt and Djibouti, Ahmed Zayed, who is also Dean of the Board of Directors.

Egypt was selected to host the 2023 event following the country’s expression of interest in hosting the meeting for the 2022 to 2027 cycle. “This was made possible, amongst others, by the high-quality standards that Egypt possessed in meeting the requirements for hosting the Annual Meetings of the Bank Group,” Secretary-General Nmehielle said.

Nmehielle said the signing of the memorandum—which defines the host country’s responsibilities and outlines other requirements for hosting the meetings—marked the commencement of planning for the 2023 event.

Canada:A “ROAD CLOSED” sign is seen at the scene of double shootings in Mississauga #Gallery

Canada:Police officers are seen at the scene investigating on the double shootings #Gallery

China:People have fun at a farm during Mid – Autumn Festival holiday in Yantai #Gallery

Notice to publisher for error in national anthem book in UP

SC: Lodging juveniles in adult prisons amounts to deprivation of their personal liberty