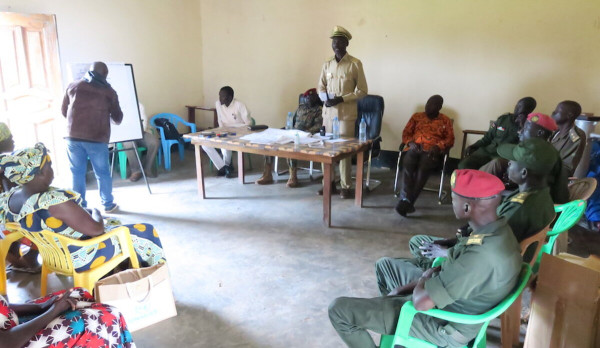 People in Morobo County, south of South Sudan’s capital Juba, have voiced concern over armed forces creating problems among local communities rather than protecting them, with women in particular having been subject to unwanted attention.

In Morobo town the situation is okay, but in the villages incidents of harassment, looting and rapes are scaring people, who hesitate to return home from camps for refugees or the internally displaced, “said Jackson Baker, Executive Director of Morobo County.

He was one of many who spoke up during a consultation and training session organized by the Protection, Transition and Reintegration Section of the United Nations Mission in South Sudan, UNMISS. The workshop, replicated in Yei County’s Mugwo Payam (administrative division), was aimed at building capacity among relevant stakeholders when it comes to protecting civilians and making it easier for displaced persons to come home.

In Gulumbi Payam, problems are reportedly especially prone to occur on Thursdays and Sundays, when markets are held in the area. Women bringing their produce for sale have been targeted by armed forces, with roads having been blocked and traders assaulted or even raped. Similar complaints were made in Mugwo Payam.

At the two meetings, held as part of a three-day-long integrated peacekeeping patrol led by the Mission’s Nepalese contingent, participants identified challenges related to the protection of civilians and listed possible actions to resolve them.

Apart from raising awareness among officers serving with the South Sudanese police force, those in attendance agreed on one solution, already stipulated in the country’s revitalised peace agreement, signed in September 2018: the creation of one national army.

“The armed forces in the country need to unite and work together to keep civilians safe,” concluded Jackson Baker, while Cephus Diggs, a representative of the peacekeeping mission, pledged to forward the issues raised by the communities to the local authorities and to follow up on the implementation of suggested measures.
Distributed by APO Group on behalf of United Nations Mission in South Sudan (UNMISS).

‘Taliban’s re-emergence not reactionary; country needs to be watchful’