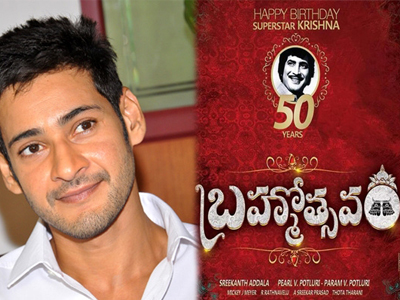 ‘Srimanthudu’ emerged as the biggest hit of superstar Mahesh Babu’s carier.  And with the actor insisting that ‘Brahmotsavam’, his family drama reflecting Telugu culture and values with Sreekanth Addala, will be a Telugu-Tamil bilingual, there was extra zing surrounding the effort. However, it’s not a not a bilingual.

It’s being made only in Telugu as of now.  Though the makers envisaged shooting it as a bilingual, the plan fell through as the film boasts of stellar cast comprising Sathyaraj, Jayasudha, Naresh, Revathi, Kajal, Samantha, Pranitha, Tanikella Bharani, Brahmaji and it turned out to be difficult for everyone—given their busy schedule—to allot more time for the Tamil portions.

Though Mahesh had an eye on Tamil market too since he is familiar with the language and enjoys a decent clout in Tamil Nadu, he will be dubbing for the Tamil dubbed version this time around.  Kajal, Samantha and Pranitha were asked to make time to promote the film in Tamil too aggressively. Guess it will take some more time for Mahesh to reel Tamil lines to the camera.