Home » Politics » USA » Clinton, Sanders Insist They Will Not Be Obama 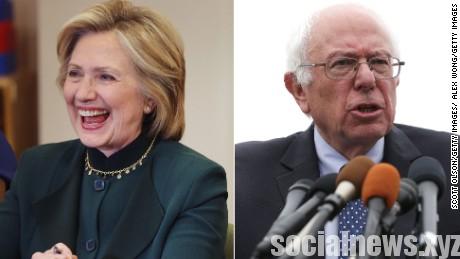 Washington, Oct 14 (IANS) As Democratic presidential candidates faced off for the first time, frontrunner Hillary Clinton, without offering any specifics, said she would be different than President Barack Obama, but closest rival Bernie Sanders promised a "political revolution."

In the first televised Democratic primary debate hosted by CNN in Las Vegas Tuesday, asked how her presidency would not be a "third term" for Obama, Clinton said: "I think being the first woman president would be quite a change."

But the former first lady and secretary of state could not specify if there would be a policy difference even as she insisted she would build on Obama's policies in some areas, and go further in others.

Self-proclaimed socialist senator Sanders, on the other hand, claimed he would bring about a "political revolution," in which far more Americans would turn out to vote, and in which the balance of power was shifted sharply away from the rich.

Clinton also sought to combat suggestions that she is too closely aligned with Wall Street banks by saying she had personally scolded Wall Street bankers to "cut it out," months before the financial crisis of 2008.

"I respect the passion and intensity. I represented Wall Street, as a senator from New York," Clinton said, after hearing Sanders outline a plan to break up big banks.

To that Sanders countered, "Congress does not regulate wall street. Wall Street regulates Congress," Sanders said. "Going to them and saying please do the right thing is kind of naïve."

But on Clinton's use of a private e-mail system while serving as secretary of state, an issue that has dogged her campaign, Sanders appeared to come to her defence.

"It wasn't the best choice," Clinton said when asked about the emails before attacking a House committee investigating the issue.

She cited a statement made by Republican House Majority Leader Kevin McCarthy, in which he implied that the committee's best outcome was to undercut Clinton's poll numbers.

"This committee is basically an arm of the Republican national committee. It is a partisan vehicle . to drive down my poll numbers. Big surprise. And that is what they have attempted to do. And I am still standing."

Seemingly coming to her defence, Sanders said: "Let me say something that may not be great politics," he said. "The American people are sick and tired of hearing about your damn e-mails."

Amid loud and sustained applause, Clinton turned to thank her rival with a handshake.

But one of the three other long shot candidates former Rhode Island Governor Lincoln Chafee said he worried that Clinton's handling of the scandal might harm American credibility. Clinton declined to respond to his criticism amid laughter from the audience.

Clinton also cited the judgement of Obama to whom she lost in the 2008 party primary as a testament to her skill on foreign policy.

"He asked me to be secretary of state," she said, after being criticised for her vote in favor of the Iraq War in 2002. "He valued my judgment," she said and trusted her advice in situation-room discussions, Clinton said.

Denying she flip-flopped on key issues for political gain, Clinton deftly parried questions on the depth of her political convictions and insisting she is a "progressive" despite the doubts of some on the left of the party.

Three other candidates-Chafee, Webb and former Maryland Governor Martin O'Malley-whose campaigns are languishing in the single digits, failed to create any buzz.

As promised Republican frontrunner Donald Trump was live-tweeting during what he predicted would be a "very boring" debate, which could create an unwelcome distraction for candidates trying to get their message out.

He started tweeting before the debate even began, bemoaning the fact that three lower-polling candidates will get so much time.

"But who knows, maybe a star will be born (unlikely)," he wrote. "We will all have fun and hopefully learn something tonight. I will shoot straight and call it as I see it, both the good and the bad. Enjoy!"