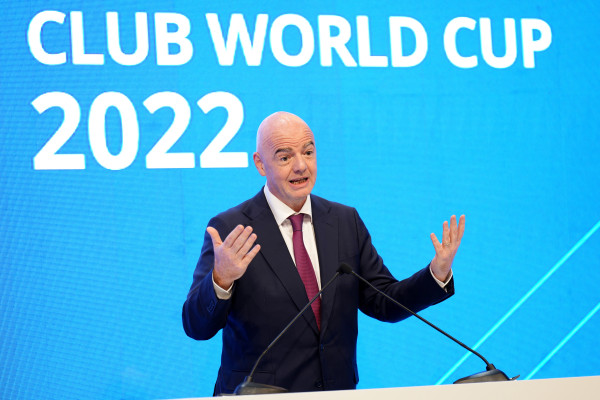 The draw for the FIFA Club World Cup 2022™ delivered an exciting series of fixtures (https://fifa.fans/3CL7a4k) for the seven clubs who will compete for the title of club world champions in Morocco from 1 to 11 February 2023.

FIFA President Gianni Infantino was present for the draw and addressed delegates before proceedings got under way. He thanked Morocco – hosts of the tournament for a third time – and stoked excitement as the countdown continues to discover which side will lift the trophy.

“Congratulations and thank you to Morocco for hosting the champions of all the continents for what will be a very important edition of the FIFA Club World Cup in February,” the FIFA President said.

It was determined that the opening game would be between CAF Champions League runners-up (2021/22) Al Ahly and Auckland City, holders of the OFC Champions League; the winners of which will take on Seattle Sounders on 4 February.

The host association representatives, CAF Champions League winners Wydad, will meet Al Hilal of Saudi Arabia in the second round of the FIFA Club World Cup Morocco 2022™, while four-time winners Real Madrid have a semi-final against Seattle Sounders, Al Ahly or Auckland City to navigate. On the other side of the draw, Flamengo’s last-four opponents will be Wydad or Al Hilal.

Also speaking at the draw, Fouzi Lekjaa, the Moroccan Football Association President, said: “This is also an opportunity to express the desire of our people and of our Kingdom to be among those willing to host football’s greatest events. We’ve always had this desire, and we will continue to express it with even more determination, enthusiasm, work and development. Long live football, long live FIFA, long live the Kingdom of Morocco.”

Matches will be played in the cities of Rabat and Tangier, with Tangier hosting the opening game on Wednesday, 1 February, and Rabat, the final on Saturday, 11 February 2023.

Distributed by APO Group on behalf of FIFA.

How effective is smog tower as AQI deteriorates in Delhi?

India has shown growth and resilience amid global headwinds: PM

‘Won’t be relied upon as precedent’: SC on HC judgment allowing minor Muslim to marry