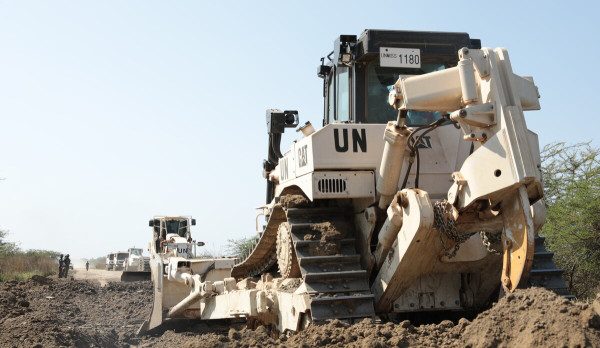 As conflict surges in the Greater Pibor Administrative Area, the United Nations Mission in South Sudan (UNMISS) is doing everything within its power to restore calm and assist displaced people.

To build confidence and boost reconciliation, peacekeepers from Republic of Korea have begun constructing a 115-kilometer road connecting Pibor with Labrab.

Vitally, upon completion, this latest effort by South Korean engineers will lead to some 423 kilometers of new or fully rehabilitated roadways enabling communities from far flung locations – Bor, Gumuruk, Pibor, Labrab, Likuangole annd Akobo – to convene and forge fruitful relationships with one another.

The road works are expected to be completed by April this year.

The aim: To ensure communities, peacekeepers and humanitarian partners can travel unhindered to all locations even during the rainy season, which usually makes roads impassable due to torrential rainfall.

According to Colonel Jong Sil Park, Commanding Officer of the South Korean engineers, such infrastructural work is critical to reduce conflict and enable residents in these locations to form enduring social bonds, which in turn, would lead to sustained peace.

“South Sudanese communities have suffered immensely since this young country got its hard fought independence. Good roads will enable trade to flourish, community members to meet and get to know one another, plus it will facilitate peacekeepers to move swiftly as well as facilitate the delivery of much-needed humanitarian aid,” he stated.

South Korean peacekeepers have been actively involved in road repairs around Greater Jonglei since their first deployment to South Sudan in 2013. Additionally, they have also rehabilitated numerous schools and hospitals

Joshimath: A massive crack developed in a road due to land subsidence #Gallery

Joshimath: Cracks develop in a house due to land subsidence #Gallery

In twist to tale, Torrent does copycat, revises RCap bid

Work from home during menstruation of women recommended in Rajasthan

AI crew brought offender before me against my wishes, wanted him arrested: Co-passenger

If you can’t respect verdict, then why elections: Sisodia on nominated councillors issue

44 judges’ names to be confirmed within 3 days: Centre to SC amid row over delay in appointments