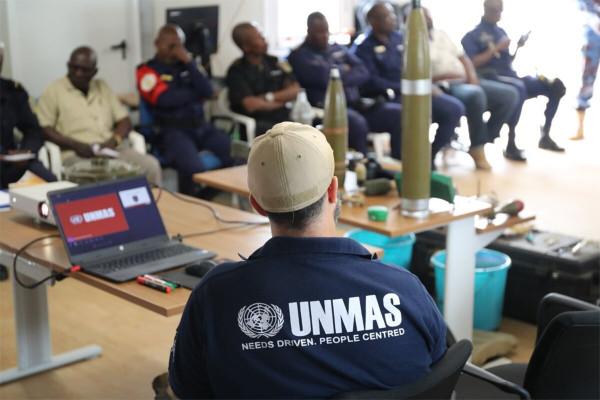 “The threat is real." Police officials in Beni acknowledge that the city is still under threat from improvised explosive devices.

In 2021, on the evening of the Christmas celebration, a device exploded in a pub in the city of Beni, killing six and injuring a dozen.

The objective of the training was to build the trainees’ capacities in dealing with the improvised explosive devices. UNMASS officers taught them how to detect the device, what are the right actions to take when they are in front of the explosive device and what actions to avoid. Notions on securing a site where a suspicious object has been detected were also provided.

For the mayor of the city, the senior high commissioner Narcisse Muteba Kashale, this training is of paramount importance.

“Last year during the same period, we came under attacks from terrorists who planted bombs here. We are looking for ways to secure the population of the city of Beni,” he explained.

Attending the training, the senior chief commissioner Jean-Pierre Wumbi, police commander in the territory of Beni, also said he was aware of the threat posed by explosive devices to the civilian population.

“It is almost two years that we have been suffering the atrocities inflicted by the ADF, with bomb explosions in the city of Beni, in Oicha [the administrative capital of the territory], in schools and markets. We have metal detectors. And with the training we have had, I believe we will endeavor to meet this requirement,” said the officer.

It is part of MONUSCO’s mandate

Since last year, UNMAS has been organizing training sessions, on a regular basis, in Beni, on the risk management of the improvised explosive devices.

Last April, Congolese troops engaged in operations to track armed groups in Beni were trained in the detection of improvised explosive devices and the related risks.

For the head of MONUSCO office in Beni, these trainings fall within the framework of the Mission’s mandate.

“The goal is to train the police and the population in handling [explosive devices]. We are in a festive period. We had a meeting with the mayor of the city and other security officials to discuss how we can secure the city together and protect the population. This training is very important. It falls within the framework of our new mandate which requires MONUSCO to help the State in reforming the security sector”, explained Josiah Obat.
Distributed by APO Group on behalf of Mission de l'Organisation des Nations unies en République démocratique du Congo (MONUSCO).

California: U.S. Congressman Kevin McCarthy arrives at the House chamber as the House meets for a second day to elect a speaker in Washington, D.C., the United States, Jan #Gallery

Washington: U.S. Congressman Kevin McCarthy arrives at the House chamber as the House meets for a second day to elect a speaker in Washington, D.C., the United States, Jan #Gallery

Washington: U.S. Congressman Kevin McCarthy listens in the House chamber as the House meets for a second day to elect a speaker in Washington, D.C., the United States, Jan #Gallery

Washington: U.S. House still in turmoil with no speaker elected on 2nd day of voting #Gallery

Must report any improper behaviour on aircraft to authorities at the earliest, says Air India CEO to staff

Cold wave shock: 25 die due to heart attack, brain stroke in a day in UP’s Kanpur

Bill seeking removal of Governor as Chancellor need not be sent to President: PDT Achary