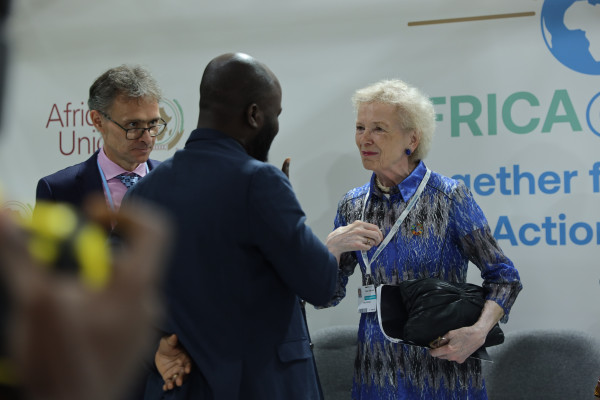 The panelists said facilities tailored to supporting women, who are helping to build climate resilience, must be visible, simple, and easily accessible.

“There is a problem about the visibility, transparency and accountability, and although there is some money floating around, we don’t have a properly dedicated climate fund or a permanent climate fund to support women entrepreneurs in combating climate change,” Robinson said.

Robinson gave the example of some women-led projects in Uganda which could do ten times more if they had access to targeted climate resources. “They had no prospects of getting the money that could be available for their sector – they didn’t even know who was getting the money or where it was going.”

“Moreover, we are committing $100 million in loans to public and private sector projects to address gender and climate issues,” Kariuki said. “The Bank is also developing an adaptation mechanism to enable individuals and groups, including women and children, to borrow money for climate adaptation projects,” he added.

The African Development Bank hosted other side events to mark Gender Day at the COP27 to highlight the successes, challenges and issues surrounding gender equality and climate change. They included the launch of the Gender in Climate Action Accelerator, a tool to support private sector companies improve the gender responsiveness of their corporate climate governance.

The Accelerator will support governments in promoting gender-sensitive climate sector policies, accelerating their green transition to meet the targets of the Paris Agreement and the Sustainable Development Goals. It is a joint initiative by the Egyptian government, the African Development Bank, the European Bank for Reconstruction and Development, and the French Development Agency, AFD.

At a session opened by Kenya’s First Lady Rachel Ruto, experts agreed that as the efforts for greener economies grow, the focus should be on upskilling and reskilling to help women and girls to access green jobs. The panel, titled “Enabling and Tracking Gender-responsive Green Jobs Recovery,” also highlighted access to information for women and strengthening gender-responsive capacity building.

In his remarks, Al Hamndou Dorsouma, Acting Director of Climate Change and Green Growth at the African Development Bank called for a more equitable distribution of climate resources in the Sahel.

Sidi Mohamed EL Wavi, Director of Climate and Green Economy at the Ministry of Environment in Mauritania, underscored the importance of eliminating barriers to quality education for women to enhance their representation at all levels.
Distributed by APO Group on behalf of African Development Bank Group (AfDB).

Infographics: MOST EXPENSIVE 5 PLAYERS RELEASED AHEAD OF IPL AUCTION #Gallery

Mehrauli murder case: Aftab to be produced in court today