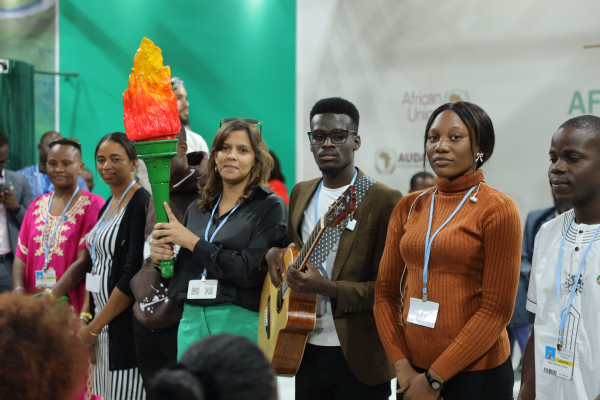 African nations on Tuesday marked a special day on the sidelines of the 27th United Nations Climate Conference (COP27) in Egypt, with a common resolve to mobilize internal and external resources to tackle climate change.

The African Union Commission, African Development Bank, the United Nations Economic Commission for Africa, and the New Economic Partnership for Africa (NEPAD) Planning and Coordinating Agency organized the event. Hundreds of youths from across the continent seized the chance to urge the world’s industrialized nations to deliver on their climate finance pledges and other commitments to Africa without further delay.

In his opening remarks, African Union Commission chairperson Moussa Faki Mahamat said the challenges facing Africa in the wake of the Covid-19 pandemic and the Russia-Ukraine war had become enormous, and had taken a toll on government budgets.

“Work is going on across the continent—many governments have rolled out initiatives to address climate impacts and build resilience,” Mahamat said. “But the challenges are huge, and time is not on our side,” he told the audience.

Mahamat called on member countries to remain steadfast in their fight for climate justice.

African Development Bank president Akinwumi Adesina said with Africa’s vast and unique arable land, what the continent does with agriculture could impact global output. “But we cannot unlock our agriculture potential unless we adapt to climate change,” he cautioned.

Adesina pointed to the fact that the African Development Bank Group was leading many climate action initiatives to boost mitigation and adaption. They include scaling up adaption finance, providing farmers with climate-resilient technologies, supporting the youth to adapt to climate change, and launching the ‘desert-to-power’ solar energy project to turn the Sahel region into a renewable energy powerhouse.

Kenyan minister of state for environment and forestry Soipan Tuya said Africa remained a strong force in the climate negotiations.

“To maintain this unity of purpose, it remains important that the negotiators and the AU are in continuous dialogue and engagement,” Tuya said. She called on developed nations to scale up mitigation actions and support.

Young people at the event called on the African Union to ensure that the conference implement decisions reached at the meetings with no further delay. “We are making a request as young people that adaptation is of importance to the African people. We want action now,” youth leader Lucky Abeng said.

“We need to change the African narratives from a country of challenges to a continent of opportunities,” he said.

Pedro said the Democratic Republic of the Congo, for example, had the world’s largest cobalt reserve to manufacture electric vehicle batteries.

“We must invest in the green recovery, ensure just energy transition to universal access to electricity. We must build agriculture and food systems,” he said, adding that accelerating food systems is essential to achieving the AU’s Agenda 2063.

The African Union Commission and the Global Center for Adaption signed a memorandum of understanding to mobilize at least $25 billion for the African Adaptation Acceleration Program—established by the Center and the African Development Bank—over five years. This is to prepare the continent for the consequences of climate change faster and at scale.

COP27, commonly referred to as “the African COP,” allows Africa to spotlight its special needs, circumstances and opportunities.

COP27 is expected to deliver action on an array of issues critical to tackling the climate emergency – from urgently reducing greenhouse gas emissions, building resilience and adapting to the inevitable impacts of climate change, to delivering on the commitments to finance climate action in developing countries.

Gulmarg: A view of the area covered in thick blanket of snow during snowfall #Gallery