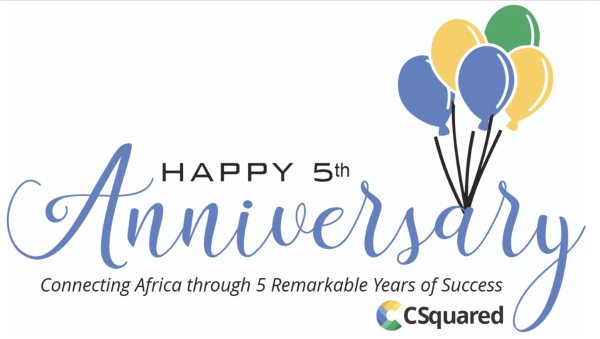 This week the Management team of CSquared Group celebrates the company's 5th Anniversary whilst in Cape Town, South Africa attending AfricaCom (http://bit.ly/3f22ajn) - Africa’s leading digital infrastructure gathering that brings together decision makers across the communications technology ecosystem focused on connecting the next billion people on the continent by inclusive, sustainable growth through tech investments.

Commenting on the Anniversary and the company’s achievements Lanre Kolade, CSquared Group Chief Executive Officer shared “It is not just a company anniversary but a family anniversary that has defied all odds to grow stronger and achieve great things together. I am so grateful to my team, our customers and partners, for their support and trust have been the biggest driver towards our continued growth. For emerging markets to fast track their development, communication is key, and the foundation of reliable communication is broadband infrastructure. Countries are now moving towards e-governance, e-health, e-education and those pillars cannot be achieved without the required infrastructure. That's the gap CSquared aims to fill, ensuring that all African countries have sufficient broadband infrastructure. Our approach ensures that everyone, both the private and the public sector benefits from the infrastructure that is rolled out by CSquared.”

This year the African Development Bank (AfDB) estimated Africa's infrastructure financing needs to be as much as $170 billion a year by 2025, with an estimated gap of about $100 billion a year. CSquared and its investors Google, Mitsui & Co (Japan), Convergence Partners (South Africa) and the International Finance Corporation (IFC, World Bank Group) play a critical role in supporting Africa achieve its ambitious digital needs.

A great deal has been achieved since 2017 when CSquared, originally a pilot project [Project Link (https://bit.ly/3ta4ZSR)] in Google, became an independent company with existing operations in Uganda and Ghana.

In March 2022, in the sunny city of Lomé, Togo, CSquared and Société d’Infrastructures Numériques (SIN), a public telecommunications asset company, announced a strategic partnership to create a joint venture (JV) - CSquared Woezon. CSquared Woezon is a Togolese company with a minority public shareholding, 56% owned by CSquared and 44% owned by SIN. The entity is in charge of maintaining and operating Cable Landing Station for Equiano, Google’s subsea internet cable running from Portugal to South Africa with Togo as its first landing in Africa; as well as the existing Lomé metropolitan optical fiber network [e-Gouv]; and the national fiber backbone network [Communauté Electrique du Bénin (CEB)].

This JV demonstrates the company's commitment and unique ability to partner with African Governments to achieve their national digital development goals. Public Private Partnerships hold the key to upgrading broadband infrastructure to next generation networks and driving the future advancement of ICT in emerging markets.

CSquared is excited to announce today a new partnership with the U.S. Agency for International Development (USAID) to establish a 350 km national fiber backbone in Liberia, extending from  the nation's capital city, Monrovia to the Ivory Coast and Guinea borders, crossing more than 13 cities, and enabling the country’s Internet service providers (ISPs) and mobile network operators (MNOs) to reach over one million Liberians and 50+  businesses and social institutions. The backbone will also provide Liberia with critical redundancy to the Africa Coast to Europe (ACE) submarine cable, currently the nation’s single source for international bandwidth and will become part of CSquared’s West Africa backbone carrying traffic from Liberia through to Nigeria.

This follows CSquared’s hugely successful partnership in 2017 with the Government of Liberia and USAID to bring best-in-class, reliable broadband infrastructure to Monrovia and its environs. The new partnership falls under USAID’s Digital Invest program, part of the U.S. Government’s Digital Connectivity and Cybersecurity Partnership and a flagship project of the Partnership for Global Infrastructure and Investment announced by President Biden in June 2022. These interventions are crucial to helping USAID fulfill its mission to help Liberia end extreme poverty and build resilient democratic institutions and to build open, inclusive, and secure digital ecosystems.

The company’s focus has also shifted to include Africa’s 2nd largest country by land mass, DRC, where at a recent World Bank connectivity conference held in Kinshasa, it was estimated that between 8 to 9 billion US Dollars will be needed to fully fiberise the DRC. CSquared with its development partners intends to significantly participate in this funding opportunity. In October, CSquared kicked off this commitment with the signing of two major deals.

The first was an MoU with SCPT (Société Congolaises des Postes et Télécommunications), enabling the Government’s goal of driving the country's digital transformation by leveraging government assets through Public Private Partnerships. Our Accord Cadre will initially have 3 key components: to facilitate the landing of a 2nd Submarine Cable in DRC similar to our successful collaboration with Google and the Government of Togo landing Equiano in Lomé, Togo; the construction of a second Cable Landing Station [CLS] to connect to the Equiano Cable; and to expand and upgrade the National Fiber backbone network.

The second was with Africell, CSquared's first anchor customer in DRC. Africell is a fast-growing mobile network operator with a pan-African footprint. Providing fast and reliable mobile network coverage and related technology services to over 16 million subscribers with a mission to make a positive everyday difference to customers, Africell and CSquared partner to impact lives through the provision of affordable, accessible and good quality telecoms products and services.

In the cloud connectivity and data center ecosystem, CSquared is a forward-thinking enabler. As an open-access network provider, CSquared has partnered with carrier-neutral data centers to make reliable connectivity available on demand to all ISPs and MNOs, who access large amounts of critical data in these data centers and the public cloud. These providers can then focus on delivering quality services to their end users while benefiting from our open access network, providing wide and seamless coverage to data centers and hosting facilities across the continent. A data center located PoP caters for layering Cloud offerings to provide simplified and tailored access, migration & consumption of multi-cloud services to businesses cost effectively to drive digital transformation across Africa.

Africa is undergoing impressive urban growth and is envisioned to reach a population of 2.4 billion people within the next few decades, favouring cities over rural areas. By 2030, it is expected that 6 of the world’s 41 megacities will be African. The urbanization process undoubtedly has the power to transform an economy. However, it also comes with a set of challenges such as the need for mobility and access to urban services, access to clean water and sanitation, public health, safety issues as well as policy-related matters.

Lanre Kolade remains enthusiastic about the company’s future and its role in directly tackling this challenge because as he states “If there is one thing CSquared has proven over the past 5 years, it is that we build broadband-enabling infrastructure for the future that guarantees a better, safer, faster customer experience, democratizing connectivity and achieving #InternetForAll. Get ready Africa, the future is promising and exciting.”
Distributed by APO Group on behalf of CSquared.

Notes to editors:
To meet with CSquared team at AfricaCom please contact cheryl.naidu@apo-opa.com

About CSquared:
CSquared is a technology company, making commercially driven investments into broadband-enabling infrastructure throughout Africa. While a basic connection is useful when it comes to Internet access, abundant, affordable broadband can transform communities and help people make the most of opportunities online.  By investing in open-access broadband infrastructure and making it available to local Internet Service Providers (ISPs) and mobile network operators (MNOs), CSquared helps bring high-quality broadband access to Africa’s major cities.