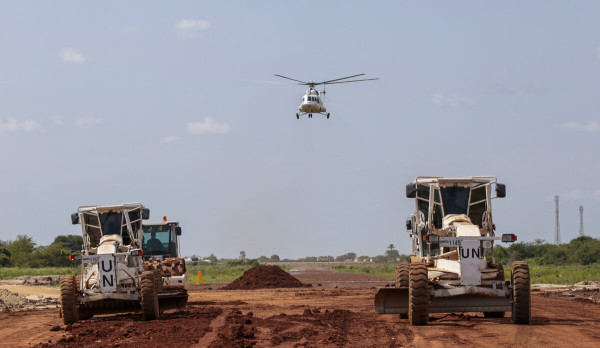 Until the past couple of years, climate change was the last thing on people’s minds in the world’s newest nation, South Sudan.

But with the country having suffered from some of the worst floods in nearly a century, there is a growing acknowledgement of the very clear and present danger posed by climate shocks.

In Jonglei, people’s lives have been disrupted by incessant rainfall and their prospects of recovery, severely impacted.

To counter some of these effects, South Korean peacekeepers serving with the United Nations Mission in South Sudan (UNMISS) have used their engineering skills to rehabilitate the airstrip in Bor.

"Floods have led to a huge increase in humanitarian needs,” explains Lieutenant-Colonel Sang-Jin Ahn, commander of the South Korean engineers.

“The airstrip allows our humanitarian partners to supply much-needed aid to vulnerable people who live in hard-to-reach areas across Jonglei state. It is also essential for UNMISS peacekeepers to conduct air patrols to conflict hotspots,” he adds.

These committed peacekeepers have extended the airstrip and expanded the runway to enable more flights to take off and land at Bor.

The project was undertaken upon the request of the state government.

In addition, South Korean peacekeepers have also shored up four dykes to keep flood waters from inundating Bor town, plus repaired damage to the embankment around the Internally Displaced Persons (IDP) camp here, so that residents do not suffer from potential backflow of contaminated rain water.

“We have mounted a united effort between state authorities, humanitarians, UNMISS, and community members to reduce the effects of flooding on populations across Jonglei,” reveals Geetha Pious, Head of the UN Peacekeeping mission’s Field Office in the state.

For Lieutenant-Colonel Ahn and his dedicated team of engineers, there is much satisfaction in a job well done.

“South Korean peacekeepers have an enduring relationship with the people of Jonglei. And we are very proud to carry forward our legacy of service to local communities here as they make the difficult journey from war to sustainable peace,” he states.

Community member, Thomas Makuei, a resident of the Achiengdiir, an area severely affected by flooding last year, is appreciative of peacekeepers’ efforts.

“It heartens me to see our friends from UNMISS and other international partners stand beside us at a time of such great need. These dykes aren’t merely helping us now but will hopefully prevent future flooding so that all of us – the communities of Jonglei – can recover from the ravages of incessant rainfall and rebuild our lives.”

: Bhopal :A woman arranges flowers at a grave. #Gallery

Kolkata: Christian community people offer prayers at the grave of their relatives #Gallery

US Fed Reserve hikes rate by 0.75% for fourth time

Bihar Shocker: Girl raped on the pretext of marriage, paraded in village

Bhushan steel case: SC notice to PNB, others on pleas of SFIO