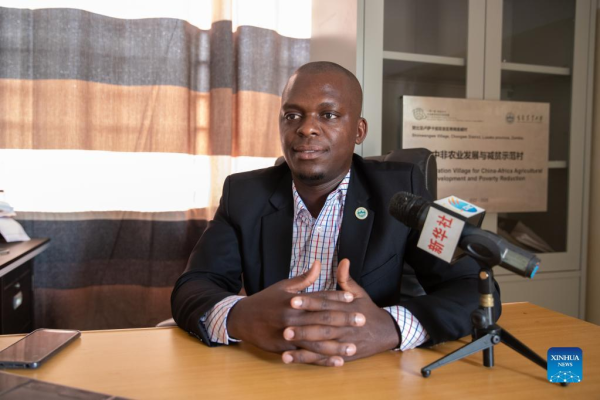 Villagers in Zambia's rural areas are hoping to raise their farming productivity and make an increased income through a Chinese-aided project that aims to make a positive impact on poverty reduction in the southern African country.

The project, namely the Demonstration Village for China-Africa Agricultural Development and Poverty Reduction that was proposed during the 8th Ministerial Conference of the Forum on China-Africa Cooperation held in November last year, will see the establishment of 10 village demonstration centers in the rural parts of Zambia over the next few years.

Earlier this month, a demonstration village has been set up at the Shimwengwe Village in Chongwe District, Lusaka Province. Through the project, villagers will be equipped with the knowledge and small-scale technologies to improve their productivity in the chicken-rearing business.

Simushi Liswaniso, the project coordinator, said the project, which runs from this year to 2025, has been financed by China under the Belt and Road/South-South Cooperation Agricultural Education, Science and Technology Innovation League (BRSSCAL) through China's Jilin Agricultural University.

He thanked the Chinese government for supporting the project, adding that such projects will enhance the friendship between the two countries since it was aimed at improving people's lives.

He further thanked Jilin Agricultural University for spearheading the project and hoped that more funds will be secured to ensure the smooth implementation of the project.

Liswaniso said the results from the pilot project will be used to assess whether to extend the project to other parts of the country in order to improve the lives of vulnerable families in rural areas.

Zambia has a lot to learn from China which has managed to lift millions of its people out of poverty because of its robust poverty reduction programs, he added.
Distributed by APO Group on behalf of The State Council Information Office: The People's Republic of China.

: – Morbi: A diver during search and rescue operations at the Machhu river #Gallery

: – Morbi: Search and Rescue operation at the Machhu river #Gallery

:Adelaide:Jerseys and caps of different teams put on a display at Adelaide Oval Stadium. #Gallery

‘We are indebted to tribal society’, PM declares Mangarh Dham as national monument

‘Matter will have far-reaching ramifications, sensitive in nature’, Centre to SC on identifying minorities

Cannabis cultivation is on ballot in Himachal