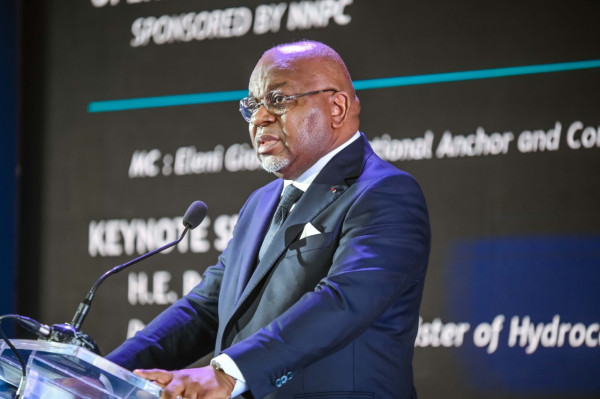 Bruno Jean Richard Itoua, Minister of Hydrocarbons, Republic of Congo and the 2022 President of the Organization of Petroleum Exporting Countries (OPEC) was one of the five winners of the Mohammad S. Barkindo Lifetime Achievement Award at the 2022 edition of the African Energy Awards, which took place during African Energy Week (AEW) (https://www.AECWeek.com/) on October 18 – 21 in Cape Town.

The Mohammad S. Barkindo Lifetime Achievement Award recognizes companies, organizations, projects and individuals shaping Africa’s energy market success and the selection of Bruno Jean-Richard Itoua by a panel of judges, including representatives from Rystad Energy – a leading global energy market research firm – and the Advisory Board of the African Energy Chamber (AEC), as one of the 2022 winners is a strong testament of the Minister’s dedication and exceptional achievements in driving Congo’s energy market growth, ensuring global energy security and economic expansion across the African continent at the back of optimal development and exploitation of oil and gas resources.

As the Minister of Hydrocarbons for the Republic of Congo, H.E Bruno Jean-Richard Itoua has driven industry maximization through the enactment of a series of policy reforms, and upstream, midstream and downstream expansion campaigns such as the Gas Master Plan as well as local content and capacity building programs aimed at boosting the Central African country’s entire hydrocarbon sector for gross domestic product growth and energy security.

As a result, Congo is set to be one of the next countries to join the list of Africa’s liquefied natural gas (LNG) producers through massive LNG developments, such as the Litchendjili Gas Project, currently underway and transitioning the country not only into regional clean energy powerhouse but into a global gas hub.

Prior to his current role as Minister of Hydrocarbons Bruno Jean Richard Itou served as Director-General of the National Oil Company of Congo, Société Nationale des Pétroles du Congo and Adviser for Hydrocarbons, Mines, Energy, and Hydraulics to President Denis Sassou Nguesso, where he led significant accomplishments in regards to boosting hydrocarbons exploration, production and monetization in Congo.

As OPEC President, the Minister continues to demonstrate his commitment to ensuring global energy security, oil and gas market stability and that energy poverty is history across the African continent by 2030.

Under the leadership of Bruno Jean-Richard Itoua, petroleum-producing countries and OPEC members have in 2022 maximized market resilience to industry challenges including the energy transition, Russian-Ukraine war and the negative impacts of the COVID-19 pandemic on the global economy. The Minister is strongly campaigning for a pan-African energy transition and unity among African policymakers, energy companies, investors and market players to accelerate the development and adoption of local policies and solutions to addressing local challenges if Africa is to lift 600 million of its people out of energy poverty whilst providing 900 million with access to clean cooking.

“The Chamber strongly agrees with and supports the selection of Bruno Jean-Richard Itoua as one of the winners of the Mohammed S. Barkindo Lifetime Achievement Award at AEW 2022. Owing to his dedication, Congo and Africa’s oil and gas industry is what it is today. With the continent seeking to maximize the exploitation of its vast hydrocarbon resources, leaders such as Bruno Jean-Richard Itous will be crucial in driving the next-generation market expansion,” states NJ Ayuk, the Executive Chairman of the AEC.
Distributed by APO Group on behalf of African Energy Week (AEW).

Hyderabad:Sun forms a crescent during a partial solar eclipse. #Gallery

Suella Braverman back as Home Secretary in Sunak government

Imran Khan’s long march to kick off on October 28

Amid row, museum set up by Muslims sealed in Assam’s Goalpara