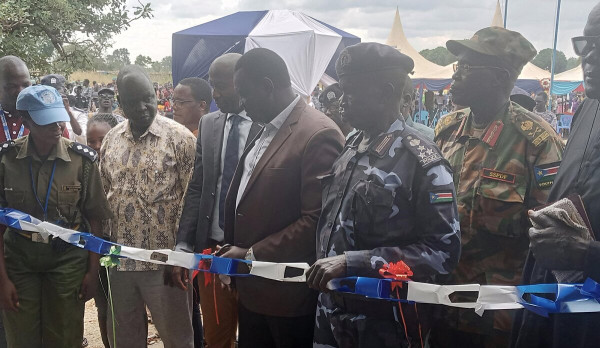 As signatories to the Revitalized Peace Agreement commit on a Roadmap to achieve outstanding benchmarks and ensure the transitional period comes to an end with free, fair and credible elections, the United Nations Mission in South Sudan (UNMISS) is continuing its support for communities across the world’s youngest nation.

A recent intervention by the UN Peacekeeping mission—handing over a newly constructed police station in Kuarjena payam [administrative division] located some 40 kilometers from the state police headquarters in Western Bahr El Ghazal.

Enthusiastic community members attending the handover ceremony of this small-scale project that’s designed to have a major impact on their lives.

“I am sure robberies and sexual violence will reduce now that we have an actual police presence in the area,” averred 26-year-old Assunta Akol Majak.

Residents of Kuarjena had suffered loss of property and lives during the 2016 world war. Many fled the area. With relative political stability following the signing of the peace deal in 2018, returnees are flocking to their original settlements but need services as well as access to law enforcement.

“We keep speaking about peace and development,” said Zakaria Joseph Garang, Acting Governor, Western Bahr El Ghazal, speaking at the inaugural ceremony. “The first step in establishing an enduring peace is ensuring that the rule of law is upheld. This police post will lead to a greater degree of safety and security for the Kuarjena community,” he added.

Furthermore, Governor Garang expressed gratitude for UNMISS’ unwavering support and pledged that, for its part, the Government’s continued commitment to improving infrastructure, connectivity and protecting civilians.

“The Kuarjena police station is one of three such installations, including Zogolona and Hai Baggari, that UNMISS has funded this year,” revealed Leopold Kouasi, Acting Head of the UNMISS Field Office in Wau, adding that the mission will help build capacities among law enforcement personnel and action more such projects.

Kolkata :Devotees visit at theme base pandal on the occasion of Kali Puja. #Gallery

Kolkata :Visitors at theme base pandal on Kedarnath Temple. #Gallery