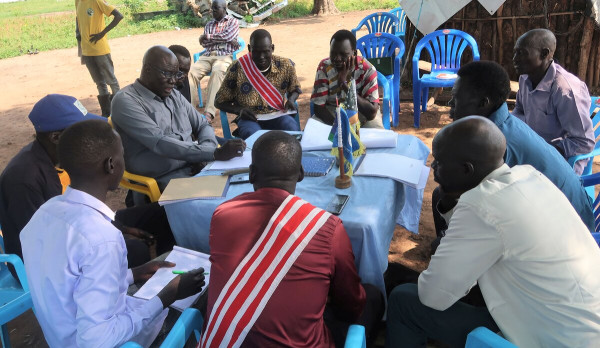 As one sets off on the waters of the White Nile by boat from Malakal, there is a point when the river Sobat merges with it before the confluence with the Blue Nile.

This is called the Sobat corridor, and is home to three counties – Nasir, Ulang and Baliet.

Communities living in these three locations have frequently been caught in conflict, cattle raids, and retaliatory attacks.

Civil wars in 2013 and 2016 haven’t helped matters, leaving people in these remote locations with weak local governance and rule of law structures, not to mention polarizing viewpoints and a massive proliferation of small arms in civilian hands.

To restore amity and repair the damaged social fabric, the United Nations Mission in South Sudan (UNMISS), through its Civil Affairs Division, partnered with Touch Africa Development Organization (TADO) and the state Ministries of Local Government and Law Enforcement, and Youth and Sports, respectively, and organized a three-day peace forum.

Some 50 participants—county commissioners, youth, and women’s representatives, as well as traditional leaders—came together with a singular purpose: To heal past wounds and rebuild peaceful coexistence among all three counties.

For Rebecca Nyapal Wech, a member of the women’s peace committee from Ulang, it was a special gathering.

“Conflict impacts women and young girls in unspeakable ways,” said Rebecca. “I have heard stories of women being brutally raped; we have lost sons, brothers, husbands, and fathers. It is high time that our communities embraced a culture of peace and reconciliation,” she added.

The overarching takeaway from the spirited discussions—the power of dialogue to address deep-rooted intercommunal issues that have led to cyclical violence.

“Dialogue is the lynchpin upon which democracy hinges and as leaders of our communities we must anchor our actions upon it so that we are able to shape a brighter, more peaceful future for our children. We have had enough of war. It is time for peace now,” he continued.

“We are here in Ulang to build capacities among local authorities; find workable options to mitigate conflict nonviolently and assure you that UNMISS continues to be your partner for peace in Upper Nile and indeed, across South Sudan,” he stated.

Recommendations from the forum included freedom of movement along the Sobat corridor for every community member.

: Meerut: An artist makes an idol of Goddess Durga at a workshop #Gallery

Drone from Pakistan spotted in Punjab, returns after BSF fire