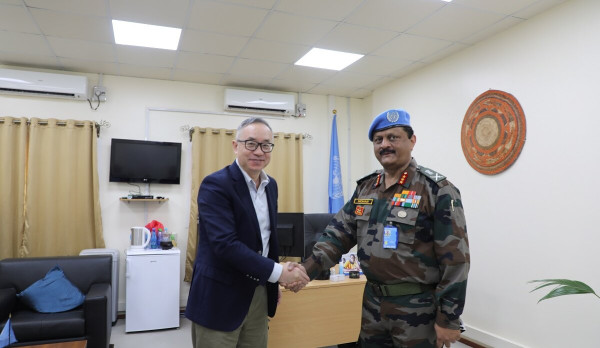 During August, which falls in the middle of the rainy season in South Sudan, the weather is typically overcast.

The top military man began his first day in the world’s largest peacekeeping mission accepting a handover of duties from Main Ullah Chowdhury, Deputy Force Commander, before heading to inspect his first Honour Guard in the country.

As his vehicle swept into the parade arena at the UNMISS headquarters, peacekeepers from China, Nepal, Bangladesh, Rwanda, Ethiopia, and India stood at attention, as the Lieutenant-General passed each representation.

“For any military leader, leading a multinational force is a matter of honour,” says Force Commander Subramanian.

“It is a privilege to have the opportunity to serve for sustainable peace in the world’s youngest country, South Sudan, by leading diverse military peacekeepers in the world’s largest peacekeeping mission. I take on this assignment with humility and a promise that I will do my very best for the people of this beautiful country,” he adds.

This is not Lieutenant-General Subramanian’s first stint with UN Peacekeeping. He has served as a Blue Helmet in the United Nations Mission in Sierra Leone (UNAMSIL).

“While I served in Sierra Leone in a different capacity, there are always commonalities between peacekeeping missions,” he reveals.

“The biggest common denominator is partnerships. Peace cannot be built unless there is a genuine collaboration among all stakeholders within the Mission; within the UN family; regional, international and, most importantly, national partners as well as South Sudanese communities. Without such partnerships, the path to sustainable peace and progress will be slow,” he states.

Upon asked about his first impressions of South Sudan, Force Commander Subramanian is eloquent.

“It’s a beautiful, sunny day and I am thankful for the warm welcome I have received. It is a great privilege to be with the South Sudanese people in this wonderful country and I will do my best to further the cause of durable peace here.”

‘We saw what happened’: J&K on plea of Hyderpora encounter victim’s father for last rites

Firhad Hakim might be next target of central agencies: Mamata