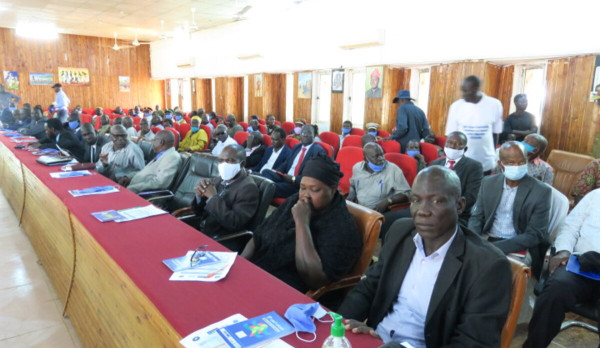 A three-day interstate conference brought together some 100 participants drawn across two states in South Sudan—Warrap and Western Bahr el Ghazal—to dialogue on a key issue: Preventing conflicts between herders and farmers during the upcoming cattle migration season.

The main takeaway from the gathering was the need to deploy an integrated joint police force and operationalize a mobile court that can step in if disputes arise.

“We have spoken a lot over the years about all farmers and pastoralists respecting the rule of law when the annual cattle migration comes up, so it is good that this year we are being proactive and sitting together before the event happens to put in place much-needed safeguards for all communities,” said Sam Muhumure, Head of the United Nations Mission in South Sudan’s (UNMISS) Field Office in Wau. “Many of these recommendations aren’t new, but we all must join together to implement them fully,” he added, while calling for participants to sensitize their communities about the risks associated with these bovine voyages and mitigating measures.

“It’s not only a conference to resolve issues related to the actual migration but also an opportunity for us to pave the way for lasting peaceful reconciliation across two states,” emphasized Zakaria Joseph Garang, Acting Governor, Western Bahr el Ghazal.

Acting Governor Garang’s words were echoed by his counterpart from Warrap, Debora Adwel Akiec. “Our two governments are making every effort to ensure that the lives of communities aren’t disrupted by any conflict that may be sparked during the upcoming movement of livestock. We are trying to make sure the Marial Bai Agreement is implemented to the letter,” stated Acting Governor Akiec.

Every year between January and April, cattle herders in the Tonj and Gogrial region of Warrap move their animals to greener pastures near Wau. This annual migration of hungry cattle and their often-armed owners creates tensions with farmers in the area, as cows tend to eat crops. They also affect available water sources negatively.

Disagreements caused by such movements sometimes escalate into violent clashes and the loss of lives, a phenomenon that in November 2016 made herders and farmers sign the Marial Bai Agreement, so baptized after a county with the same name, stipulates rules on how to resolve migration related struggles, procedures for seeking permission to move cattle and what compensation should be paid for crops eaten and livestock killed.

Youth attending the conference said that they found it beneficial. “We have received a lot of useful information, especially about the work of the joint mobile court which will surely help us ameliorate any disputes that may arise during this annual occurrence,” said Dominic Dut, a youth representative from Warrap.

Similarly, women representatives, speaking on behalf of fellow women who in the past have often been subjected to sexual violence during the movement of livestock, were happy as well. “I am appreciative that laws regulating cattle movement have been confirmed during the conference. This will not only make cattle migration a time for development instead of conflict but also ensure greater protection for women,” averred Elizabeth Awal, also from Warrap.

For Wau community leaders Peter Monjlet, Ken Alen Yak and Emilio Ulaw Baggari, the renewed emphasis on mobile courts and the need by both farmers and livestock owners to uphold the rule of law was a welcome decision and they lobbied for strict access rules for herders to ensure harvests aren’t damaged.

The conference was supported by UNMISS and funded by the UN Multi-Partner Trust Fund for Reconciliation, Stabilization, and Resilience in South Sudan (RSRTF), a joint initiative by UN Peacekeeping mission and the UN Country Team.
Distributed by APO Group on behalf of United Nations Mission in South Sudan (UNMISS).

: Ahmedabad :Health workers set up beds inside a ward being prepared for the omicron coronavirus variant at Civil hospital. #Gallery

Bengaluru:A man receives a dose of the COVID – 19 vaccine – at a Health Centre at Dasappa Hospital. #Gallery

Bengaluru:People wait for their turn to get covid – 19 vaccine at a Health Centre at Dasappa Hospital, as vaccination drives have been intensified after 2 cases of Omicron Coronavirus variants were found. #Gallery

: Bhubaneswar :Members of Odisha anganwadi ladies Workers Association participate in a mass rally at Mahatma Gandhi marg for their demands including increase their monthly wages. #Gallery

Bengaluru:Officials of Bruhat Bengaluru Mahanagara Palike (BBMP) once again seized the entry to the Mantri Mall in Malleshwaram in the city over non – payment of taxes #Gallery

Akhilesh is daydreaming, we are sure to win: UP Dy CM

China attempting to build military base on the Atlantic Ocean