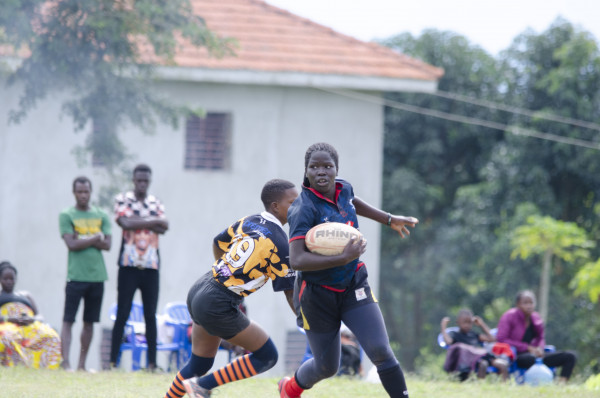 The Central Region Women’s 10s were hosted by Avengers at the Busambaga grounds in Entebbe with a total of 8 teams taking part. The Black Pearls suffered their first loss to a determined Avengers side during the final leg of the URU Central Women’s 10s. Despite the loss, Black Pearls were crowned overall Central region Champions while Avengers were the third leg winners.

We were graced by the presence of MP Elect of Entebbe Municipality Hon. Michael Kakembo aka Mbwatekamwa who appreciated the teams for exhibiting sportsmanship during and after the tournaments. "I’m very happy to have got the chance to watch women’s rugby in my area and I pledge to support the efforts of all stakeholders ensuring that this game is played well and safely." -Hon Michael Kakembo. He also noted that he is aware of the land grabbers who plan to take the land where the rugby ground is and promised to protect the sport at all costs.

Blue Whales emerged overall Champions of the Tier B central women’s 10s while Black Diamonds were the third leg winners of Tier B.

The Eastern region final circuit was concluded with an awards ceremony for the most valued players, upcoming players and the overall regional winner. Mbale Eagles were crowned overall winners of the Eastern Regional women’s 10s. Nabalayo Christine of Nyondo (MVP round 2),Namalemba Habiba of Bumageni(MVP round 3),Gamisa Mariam of Mbale Eagles(upcoming player round 1),Ngiro Patricia(upcoming player round 2) and Nambuya Sandra of Nyondo were the other awardees of the day.

The Northern region will have their final circuit in Gulu hosted by Gulu Sprinters on 8th May 2021. Lira Matrix, Aduku Tigers, Kitgum Queens and Gulu Sprinters are the teams that will take part in this circuit.

Distributed by APO Group on behalf of Uganda Rugby Union.

Bill and Melinda Gates to divorce after 27 yrs

SII to invest 240M in UK to expand vaccine business

Eatala Rajender hits back at KCR