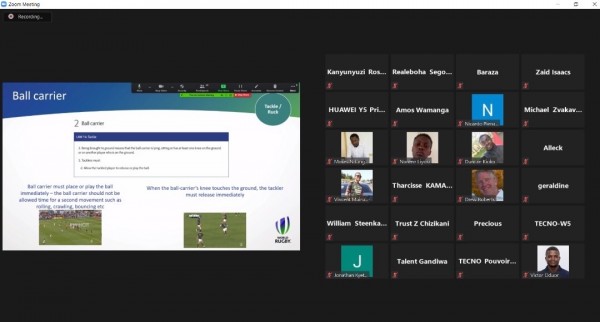 Referees and Coaches of Match Officials (CMOs) drawn from across the continent are following a series of online workshops run by Alain Rolland, High-Performance 15s Match Official Manager for World Rugby. This initiative will help upskill match officials in the key focus areas of the game, and the programme will run for over two months.

With 42 participants (including 11 women), the English-speaking group, comprised of Botswana, Ghana, Lesotho, Kenya, Rwanda, Uganda, Zambia & Zimbabwe, kicked off on May 19 2020. The French-speaking group, with 35 participants (including eight women) from Burkina Faso, Cote d’Ivoire, Madagascar, Senegal & Tunisia, began its first session on May 21 2020.

According to Mudiwa Mundawarara, Rugby Africa (www.RugbyAfrique.com) Referee Manager, the COVID-19 pandemic and the restrictions that it has brought, has meant that Rugby Africa have had to resort to the use of technology. “This will very much be the case going forward and will enable us to take such development initiatives more widely than just to the Rugby Africa Panel. Noteworthy, has been our insistence on the inclusion of women for these workshops. The numbers are still low, but this is a start. We hope to address this through development initiatives aimed specifically at women match officials’’, said Mundawarara.

Each group will hold seven one-hour sessions of, every two weeks. Facilitator, Alain Rolland, engages with the audience online via the Zoom platform by presenting videos on various phases of the game. The topics covered are as follows:

Beryl Akinyi, a female referee from Kenya, commented: "The workshop was very educative, thanks for the opportunity. I enjoyed the session, learnt a few things and refreshed on others that I already knew’’. As for Jacky Husselman, CMO from Namibia, "This first one was a very good session. Maybe a bit short on time, but I guess everyone has their things to do and we can't have it longer. I’m looking forward to the next course".

Alhambra Nievas, Referee Talent Development Manager with World Rugby, admitted her satisfaction. She recognized that "while the Covid-19 pandemic has produced plenty of challenges, World Rugby has identified this as an ideal opportunity to work with the regions and unions building together with our capability and capacity in providing a bespoke learning experience. This training project goes through the key areas of the game and agreed on guidelines, preparing us as Match Officials to be more consistent when rugby restarts.

"We kicked off this week with the first session around the breakdown. It is a new environment for everyone, not being in a room together. Still, the groups were very engaging and generated some great discussions with the different scenarios and clips which were reviewed", concluded Alain Rolland, High-Performance 15s Match Official Manager with World Rugby.
Distributed by APO Group on behalf of Rugby Africa.News & Results:
Follow @RugbyAfrique on Twitter, Instagram and Facebook
Website: www.RugbyAfrique.com

No domestic cricket to be played before August 1: ECB

India open to talks with Nepal in environment of trust

After backlash, TTD decides not to sell or auction any asset

From BJP to Gujjars to Sikhs, why has ‘Paatal Lok’ angered so many?

Lockdown: Amit Shah dials all CMs to ask ‘What’s next?’

On Ladakh standoff, India reminds China of all past agreements

ICC defers decision on T20 WC & other matters till June 10

From BJP to Gujjars to Sikhs, why has ‘Patal Lok’ angered so many?

Next time, India to block locust attack at border itself: Minister