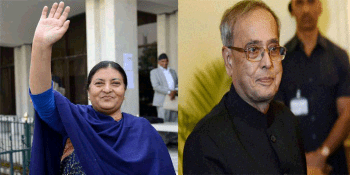 New Delhi, Oct 29 (IANS) President Pranab Mukherjee on Thursday congratulated Bidhya Devi Bhandari on being elected as the first woman president of Nepal and assured all possible help to the neighbouring country.

Noting that her election came at a critical juncture, Mukherjee exuded confidence that Nepal would move towards peace, stability and development by accommodating the aspirations of all the people under her guidance.

"Please accept on behalf of the people and government of India and on my own behalf, warm felicitations on your election as president of Nepal," Mukherjee said in his message.

"India as a close friend and neighbour would continue to extend all possible assistance and cooperation in accordance with the priorities and wishes of the government and people of Nepal," the president said.

"I look forward to work with you towards further strengthening the understanding and cooperation between our two countries. I would also like to avail of this opportunity to convey my best wishes for your personal health and well-being," President Mukherjee said in an official statement.

Bidhya Devi Bhandari, vice chairman of the ruling Communist Party of Nepal (Unified Marxists-Leninists), was on Wednesday elected the president of Nepal, making her the first woman to occupy the post in the Himalayan nation since it abolished monarchy and became a republic in 2008.