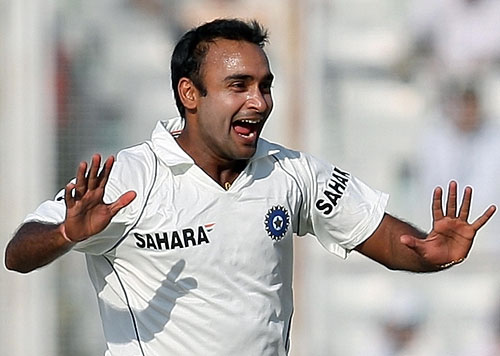 Bengaluru, Oct 27 (IANS) Indian spinner Amit Mishra was arrested on Tuesday for allegedly assaulting his girlfriend in a city hotel recently and was freed on bail later, police said.

"Mishra was formally arrested after a three-hour interrogation in the assault case by the investigation officer and released on bail as the offence is bailable," city deputy commissioner of police Sandeep Patil told reporters here.

Vandana Jain, a Mumbai-based little known Bollywood film producer who claimed to know 32-year-old Mishra since the last four years, filed a complaint against him at a local police station on September 27, alleging that she was abused and assaulted by the bowler at a posh hotel in the city on September 25.

"We have collected details from Mishra, including his version of the incident. We will complete the investigation and submit the case report to a local court soon where he will have to face trial on summons by the court," Patil said.

A case was registered against the right-arm leg-spinner under various sections, including 325 and 354 of the Indian Penal Code (IPC) for outraging the modesty of a woman and assaulting her physically.

The police had issued a notice to Mishra on October 20, asking him to appear in the police station for interrogation by the investigating officer.

"If convicted, Mishra faces a maximum punishment of six to seven years under the relevant sections of the IPC in which the case has been registered," Patil said.

Mishra was in the city in the last week of September to attend the Indian team's preparatory camp at the National Cricket Academy for the Mahatma Gandhi-Nelson Mandela series against South Africa.