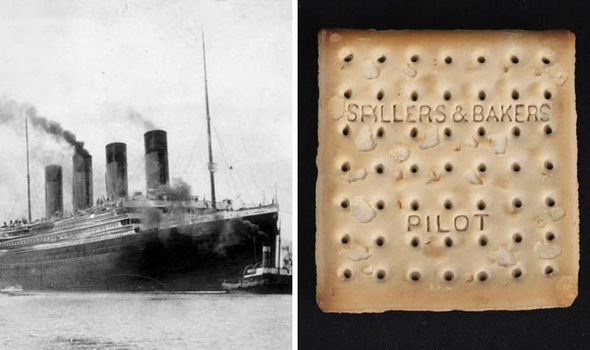 London, Oct 24 (IANS) A humble biscuit that survived the sinking of the Titanic in 1912 became the most expensive nibble in the world on Saturday when it was sold at an auction in England for $23,000.

The square-shaped biscuit, made with just flour and water, and just nine-cm by 10-cm in size, was stored in a survival kit aboard one of the Titanic's lifeboats.

Ahead of the sale, with an estimate of up to $15, 300, auctioneer Andrew Aldridge said the Spillers and Bakers Pilot cracker biscuit, found inside a lifeboat survival kit, was "the world's most valuable biscuit".

The biscuit was recovered by James Fenwick who kept as a souvenir. And stored it in a waterproof envelope used for storing camera film.

Fenwick and his bride Mabel departed from New York on the ocean liner Carpathia on the start of a three month honeymoon. The Carpathia was diverted to help in the rescue operation after the Titanic sank.

The Fenwick archive, being sold by descendants, is regarded as a unique collection of photographs of the rescue operation, and included that single biscuit.

More than 700 people were rescued by the Carpathia, but a further 1,500 passengers and crew from the Titanic perished.

Items from the Fenwick collection were among more than 200 items sold at auctioneers Henry Aldridge and Son in Devizes, Wiltshire.

Auctioneer Andrew Aldridge commented: "It is the world's most valuable biscuit. It was sold to a buyer from Greece. I have been selling Titanic items for more than 20 years and have never seen anything like this biscuit previously. As well as being exceptionally rare, it is quirky."

"Will the buyer take a bite out of the biscuit. I doubt it, it would be a most expensive nibble. I doubt we will ever see anything like this again from the Titanic".

"We don't know which lifeboat the biscuit came from but there are no other Titanic lifeboat biscuits in existence. It is incredible that this biscuit has survived such a dramatic event."

"In terms of precedence, a few years ago a biscuit from one of Shackleton's expeditions (to the Antartic) sold for about 3,000 pounds (almost $4,600) and there is a biscuit from the Lusitania in a museum in the Republic of Ireland."

Among the other rare maritime items sold at Saturday's auction was an amazingly rare photograph of the iceberg said to be the one struck by the "unsinkable" Titanic on its maiden voyage from Southampton to North America in 1912.