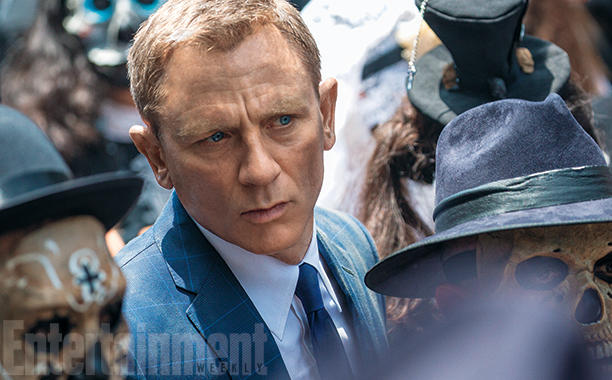 Los Angeles, Oct 24 (IANS) Some new pictures of the upcoming James Bond movie "Spectre" have been debuted ahead of its theatrical release.

Featured in the new issue of Entertainment Weekly magazine, the pictures highlight Daniel Craig and Lea Seydoux in action while they try to extinguish the titular evil organization, reports aceshowbiz.com.

One of the photos finds Craig and Seydoux weaving through the crowded streets of Tangiers.

The 007 agent is also seen among people wearing costumes during the Day of the Dead festival in Mexico City.

There is also a glimpse at Marco Sciarra (Alessandro Cremona), an Italian hitman, who gives Bond some trouble in the city.

As the mission continues, the British superspy is seen piloting a plane before he eventually walks out of the wrecked plane to shoot enemies.

Aside from the action sequences, another photo shows Bond seducing Lucia Sciarra (Monica Bellucci) in a hotel room.

Directed by Sam Mendes, the movie will be released in US on November 6.

Sonu Sood And Wife Spotted At Airport In Mumbai – Gallery

Ekta Kapoor At Trailer Launch Of Do Baaraa – Gallery

Not mandatory for ED to supply ECIR, disclosing ground of arrest enough: SC

Democracy in peril due to BJP’s ‘monstrous’ political ambitions: Thackeray