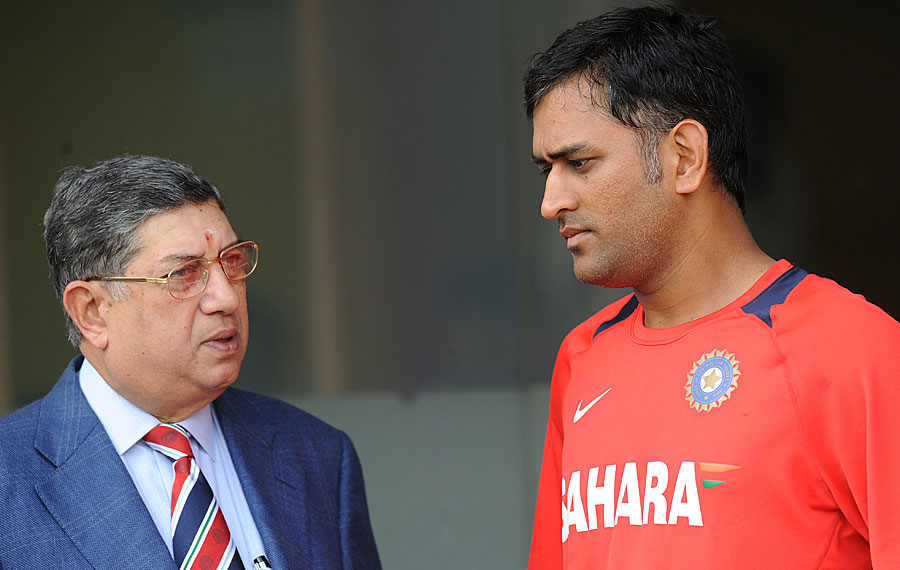 A top source said that Dhoni met Srinivasan over breakfast and was at the ICC Chairman's residence for close to 45 minutes. After he left, BJP leader Subramanian Swamy met Srinivasan.

Srinivasan, who was earlier the owner of the IPL franchise Chennai Super Kings, had to detach himself from the Dhoni-led side due to conflict of interest.

The Tamil Nadu strongman was also removed from the BCCI top job after cases of fixing cropped up against his son-in-law Gurunath Meiyappan, and he now serves as ICC Chairman only.

CSK and Rajasthan Royals (RR) were suspended for two years by The Board of Control for Cricket in India after the Supreme Court appointed Lodha Committee found both the team owner's, Meiyappan and Raj Kundra (RR) guilty of betting.

Dhoni, who has been the skipper of CSK for the past eight seasons, has refused to comment on his visit.

It is speculated that Dhoni had gone to meet Srinivasan to discuss the matter relating to CSK, but his visit has raised many eyebrows with few calling it a "breach of faith".

A Petitioner in the IPL spot-fixing case, Aditya Verma, who is Secretary of the unrecognised Cricket Association of Bihar, said in a letter to Dhoni that the meeting with the tainted boss should have been avoided.

"Today I am shocked to see a channel showing that you (Dhoni) went to visit Srini's house for breakfast. Legally there's no bar but being a captain of Team India you can avoid a visit to his home," Verma wrote in his letter to the limited-overs captain.

"Earlier you have faced criticism when you gave a statement to Mudgal committee about Guru's role in CSK.

Everybody knows that who pressurised you to give your statement regarding Guru's role in CSK. Lastly, Lodha committee banned Gurunath for life due to conflict of interest of Srinivasan in BCCI and CSK.

"Hon'ble Supreme Court ousted Srinivasan from BCCI in his order dated 22.01.2015. You are the captain of the national team at present. When Lodha committee report is awaited, your visit to ex-CSK owner's home is a giving wrong message to the sports world. Nobody is above the law, so don't repeat such silly things again for the sake of BCCI... " he wrote.