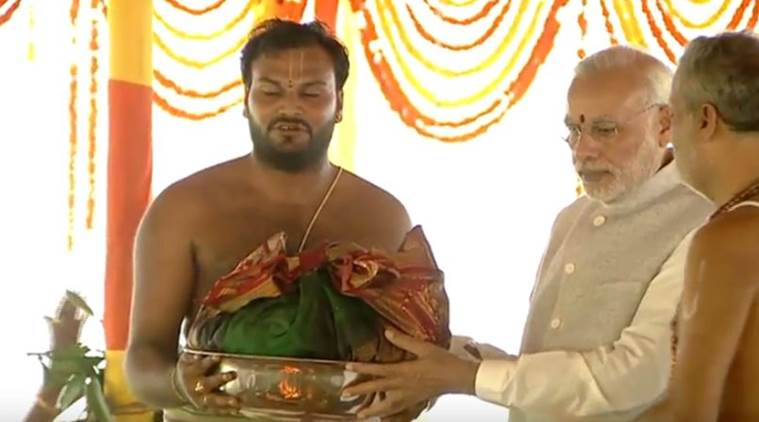 Vijayawada, Oct 22 (IANS) Prime Minister Narendra Modi on Thursday promised to fulfil in letter and spirit all the commitments made in the Andhra Pradesh Reorganisation Act.

Addressing a massive gathering at Uddandarayunipalem near here after laying the foundation stone for Andhra Pradesh's new capital Amaravati, he assured people that the central government will stand by the state in its journey for development.

"Be assured this pair of Chandrababu Naidu and Modi will achieve in time-bound manner the commitments made and fulfil the dreams of Andhra," he said.

Modi, however, made no announcement of the special category status or the special package for the state which Chief Minister N. Chandrababu Naidu was hoping for. 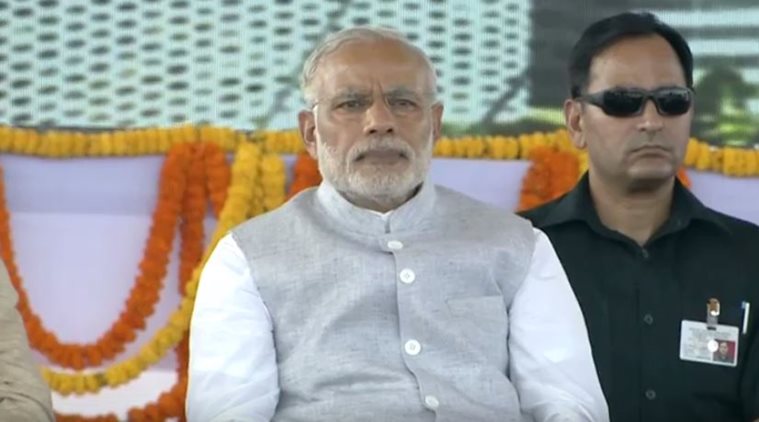 The prime minister hoped that Amaravati will become a model for the new initiatives taken by his government for urban development and Andhra Pradesh will lead the new economic revolution by becoming a hub of startups and innovation capitalising on its strength of skilled manpower.

Without naming the Congress party, he said the people who divided the state for their political interests and in a great hurry, were again trying to spread poison by provoking people with false propaganda.

He was apparently referring to the allegations by the Congress and other opposition parties that the central government failed to fulfil its promise on special category status.

Both the Congress and YSR Congress party stayed away from the foundation stone laying ceremony because of what they called forcible acquisition of land from farmers for the capital.

Modi was all praise for Naidu for taking up the development work for the state capital in a short span of time by mobilising the best expertise in the world.

While noting that only a few cities were developed after Independence, he said unfortunately the thinking during the last few decades was that urbanisation was a problem.

"That is why we ignored this growth centre. The need of the hour is that urban development should not be viewed as a problem but as an opportunity. It is for this reason that the government has embarked on developing 100 smart cities keeping pace with the changing technology in the world," he said.

Modi said the smart cities should become centres of economic activity and bring change in people's lives with smart technologies in all spheres like transportation, walk to work concept, promotion of greenery and zero wastage. 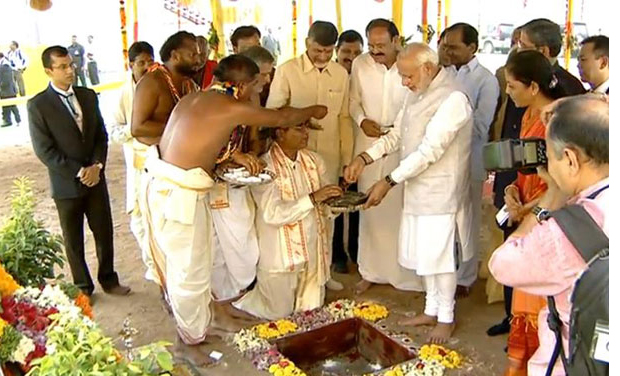 Modi said he got an opportunity to develop a city when the 2001 earthquake destroyed Kutch and he as the chief minister of Gujarat embarked on its reconstruction. He noted that Kutch is now emerging as one of the fastest growing districts.

Modi said this region has the capacity to avail of the startup programme launched by his government.

He noted that lakhs of youth from Andhra have made a place for themselves in different parts of the world through their skills and hard work. He was confident that Andhra will lead a new economic revolution which will have youth at the centre.

He said the frequency of the central government and Chandrababu Naidu matched with great understanding and perfect coordination.

Modi said the central government focussed on human resources development in Andhra by setting up 11 institutions of higher education and research.

Modi, who began his speech by greeting people in Telugu, said he brought soil from parliament and sacred water from the Yamuna river to convey the message that Delhi will stand by them in the journey of development.

Prime Minister Narendra Modi said he was pained by the loss of life and damage to property that came with the bifurcation of Andhra Pradesh and Telangana, and blamed the former Congress-led government for dividing the state in haste.

"Andhra and Telangana bifurcation was done in a hurry, without proper consultation, but I am still pained by the loss of innocent life and damage to property that took place...," Modi said after laying the foundation stone for new state capital Amaravati near here.

"There are some things that the British did and it still bothers us... The former government has also done something similar... there is always tension between Andhra and Telangana," he said as Urban Development Minister M. Venkaiah Naidu translated it in Telugu.

"Whether it is Andhra or Telangana, our soul is Telugu. Both states are two arms of the Telugu soul, both states shall prosper," he said.

He also said that three states were divided in former prime minister Atal Bihari Vajpayee's tenure, but there was no bad blood.

"Three states were divided in Vajpayee's time, there was no bloodshed, no bad feelings, I wish that for Andhra and Telangana too," he said.

After laying the foundation stone for the capital, Modi presented the soil and water to Andhra Pradesh Chief Minister N. Chandrababu Naidu.

The state government brought soil and water from all 16,000 villages and water from holy places belonging to all religions both in India and abroad for use in the development of Amaravati.

Naidu sprinkled a part of this soil and water from a helicopter on Amaravati on Wednesday.

Naidu thanked Modi for contributing to the campaign with the soil from parliament and water from the Yamuna.

He said holy water was brought from all rivers in the country, places of worships of all faiths and the soil from villages of national leaders.

An all-religious prayer meeting was also held at the foundation stone ceremony. The religious leaders of all faiths expressed their best wishes for the development of Amaravati.