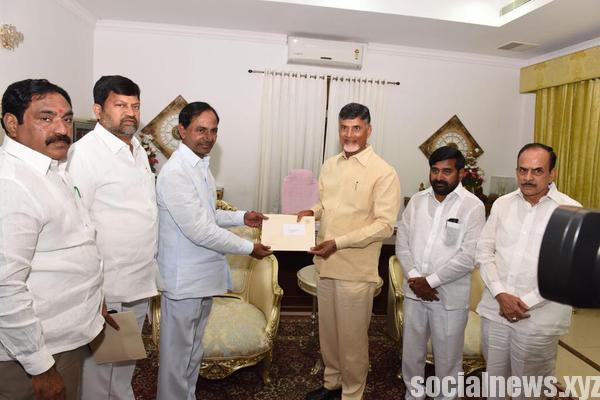 Hyderabad, Oct 18 (IANS) Setting aside the bitterness in their relations due to cash-for-vote scam, Andhra Pradesh Chief Minister N. Chandrababu Naidu on Sunday met his Telangana counterpart K. Chandrasekhar Rao to invite him for the foundation stone laying ceremony of the new state capital.

Naidu, who flew in from Tirupati, drove to KCR's official residence and handed over the invitation for the ceremony on October 22 when Prime Minister Narendra Modi is scheduled to lay foundation stone for Amaravati

This was Naidu's first visit to Telangana CM's residence after bifurcation of Andhra Pradesh.

This was also the first one-to-one meeting between the two chief ministers. They had met earlier in the presence of both states' governor E.S.L. Narasimhan. The two leaders were engaged in a bitter war of words after a legislator of Naidu's Telugu Desam Party (TDP) was caught red-handed in May while trying to bribe a nominated legislator of Telangana to make him vote for the party candidate in Telangana legislative council elections.

The Telangana Rashtra Samithi (TRS) had accused Naidu of being the mastermind in the cash-for-vote scandal. An audio tape of Naidu's purported telephonic conversation with nominated Elvis Stephenson was also aired on some TV channels.

Naidu had hit back by complaining to the central government that his phone was being tapped by Telangana government.

The TDP chief had also urged the central government to handover special powers to the governor in Hyderabad, the common capital.

Too many complaints of additional service charge by restaurants, hotels