Home » Sports » Cricket » Dhoni Will Not Let Indian Cricket Down 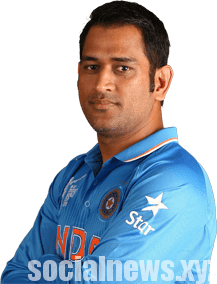 It is amusing to find former cricketers sitting in judgment on Mahendra Singh Dhoni’s future in international cricket. Joining the discussion is a divided media which in any case thrives on controversies.

Does someone who quit Test cricket abruptly with 10 Tests shy of hundred Tests in the middle of a series need to be told that his playing days in all forms of cricket are over? Surely not, like most iconic cricketers before him, the decision to call it a day should be left to him. In the meanwhile, let him play the South Africa series without stress or anxiety.

The former cricketers forget their playing days and how some of them tried to cling on for reasons other than cricket. Some were backed by officials, some overstayed to protect their endorsements and still some others prolonged not knowing how to kill the post-retirement boredom.

When Dhoni quit Tests in December during the series Down Under, he took his detractors by surprise. He did not give them a chance to pile on to him. He did not wait to get nudged or pushed out like some of the greats he is alleged to have conspired to get rid of them. Remember, on the previous tour to Australia he had hinted that he might quit one of the formats to prolong the other. It was thought that he would be only thinking of defending his 2011 World Cup.

At 34, he may not be looking at the next World Cup, but he will certainly be looking to lead the side in the World Twenty20 at home next year before taking a final call. Right now, he may be more worried about his recurring back problems than his temporary loss of form.

As statisticians pointed out, his loss of ODI form is similar to that of Sachin Tendulkar’s Test slump a decade ago when people started writing his obits. Like Sachin’s average of 40 plus at a particular stretch is seen as a terrible loss of form because his career average was above 50.

Dhoni in 2015 is averaging around 39 as compared to his career average of 52, a statistic in the case of any other middle-order batsmen would be seen as reasonably good.

The other argument for pulling him down is that he does not appear to be the finisher he once was as he could not get the 11 runs needed in the last over in the first ODI against South Africa. Why only Dhoni, there were four others who came and went before and after him, but none could hold his nerve.

The simple fact is that the South Africans batted marvelously well in the death overs whereas Indian batsmen could not play big shots. Surely, this was not the first time that India or Dhoni messed up in finishing a game. Think of the 20-year-old South African, Kagiso Rabada, carried out the team’s bowling plan to get rid of two big hitters in the last over of the match.

Two defeats in a Twenty20 lottery and a narrow loss in the first One-dayer against South Africa good enough reasons for a captain to put in his papers?

May not be, but the herd mentality is trying to force Dhoni to hand over the reins to Virat Kohli, the man many see as the new saviour of Indian cricket after leading the team to a 2-1 Test series win in Sri Lanka after losing the first Test.

Compare it with the record of the rising sun Kohli. His last hundred in an ODI came at Adelaide in the World Cup match against Pakistan and after than he has not scored a fifty in the next 11 games. He scored 389 runs in 16 innings this year at an average of 29.92. Does that mean Kohli should make way for another hard-hitting young batsman? The argument is as specious as saying Dhoni is a liability to the side.

Imagine, someone like V.V.S Laxman being on trial in every match he played till his last Test! The vultures were in the wait for him to fail and even his retirement from the game came in unfortunate circumstances, not being able to play the last Test at his home in Hyderabad. Laxman would not speak why he quit without notice and speculation has it that Dhoni had a hand in it.

Be it Tendulkar, Anil Kumble, Sourav Ganguly, Rahul Dravid or Laxman they all knew when the time had come for them to go. A couple of them may have thought they had a year or two more of cricket left in them, but they had to take other issues into consideration, the prime one being the future of Indian cricket.

Players, great or otherwise, will come and go and the debates over their shelf life will continue. But nobody has a right to humiliate a great player. Look at Dhoni’s record, he has won all the ICC limited-overs tournaments and took India to the pinnacle of the Test pyramid. Leave him space and time to decide, he will not let Indian cricket down.

Unless we learn to respect our sporting heroes, we will continue to be an awful sports nation.

(Veturi Srivatsa is a senior journalist. The views expressed are personal. He can be reached at v.srivatsa@ians.in)