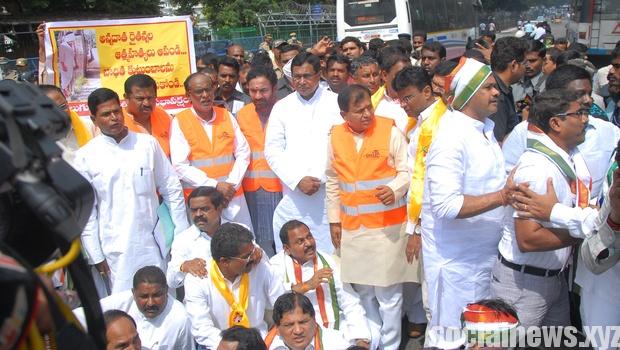 Hyderabad, Oct 9 (IANS) Opposition parties have called for a shutdown in Telangana on Saturday to force the government to take immediate steps to check farmers' suicides.

The main opposition parties - the Congress, TDP, the BJP and the Left parties -- have called for the shutdown. Several people's organisations have announced their support.

Police on Friday arrested leaders and activists of the Congress when they tried to take out a rally here in support of the shutdown.

Former minister D. Nagender and former MP Anjan Kumar Yadav were among dozens of leaders arrested when they tried to take out a rally from the historic Charminar.

The main opposition party wanted to organise the rally from Charminar to Secunderabad to appeal to people to make the shutdown a success.

Tension prevailed as police stopped the Congress leaders on the ground that there was no permission for the rally. Shouting anti-government slogans, they squatted on the road, disrupting the movement of vehicles in the morning rush hour.

All the protestors were arrested and shifted to Kanchanbagh police station.

The opposition parties have called for a state-wide shutdown to demand one-time waiver of farmers' loans.

Meanwhile, opposition leader K. Jana Reddy has appealed to the people to make Saturday's shutdown a success. He said the government had failed to check farmers' suicides.

"We will continue our protest till farmers get justice," he said and alleged that the TRS government failed to implement loan waiver scheme for the farmers.

Jana Reddy said the government did not make a clear statement in the legislature and resorted to the undemocratic method by suspending all opposition legislators for the entire suspension.