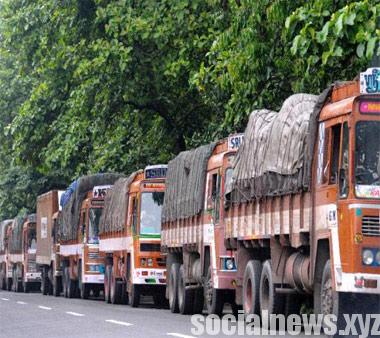 Lakhs of trucks kept off the roads on Thursday as transporters went on a nationwide strike called by the All India Motor Transport Congress (AIMTC) to oppose the toll system.

Delivery of goods was affected in most states. Delivery of essential commodities like milk, vegetables and medicines, however, were exempted from the strike.

Trade insiders told IANS that the strike could lead to losses running into hundreds of crores of rupees to the trading community, truckers and even the government.

Talks between the AIMTC and the transport ministry failed after truckers rejected the government's offer of implementing an e-toll (electronic toll) system by December.

The government has ruled out scrapping of the toll system.

The AIMTC has claimed that toll barriers have become dens of corruption, harassment and extortion.

About 16 lakh trucks went off the roads in Telangana and Andhra Pradesh on Thursday as part of the indefinite strike by the truckers to protest against the present toll system.

Movement of goods to Hyderabad, Visakhapatnam, Vijayawada, Guntur and other major towns was affected severely by the strike.

The truckers' body is demanding one-time payment of taxes besides simplification of Tax Deducted at Source (TDS).

In Madhya Pradesh, supplies of essential goods to the state were hit.

Truckers' association president Paramvir Singh told IANS: "We demand the scrapping of the toll system and changes in the road pollution and safety 2015 regulations. The state has more than 40,000 trucks and they will not run until our demands are met."

"The strike is likely to cause Rs.1,500 crore worth of losses to truckers and over Rs.10,000 crore of a loss to the government on a daily basis," AIMTC president Bhim Wadhwa said.

The AIMTC claims that it represents about 87 lakh trucks, and 20 lakh buses and tempos.

Another truckers' body, All India Transport Welfare Association (AITWA), has not joined the strike.