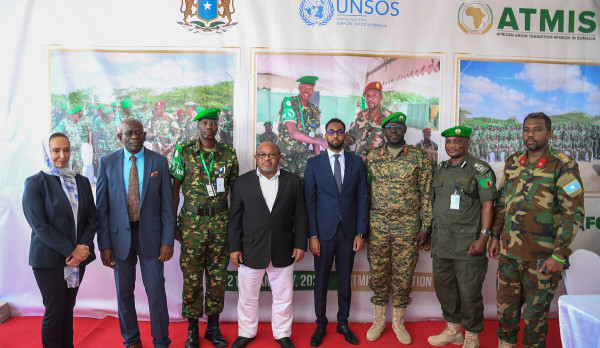 The African Union Transition Mission in Somalia (ATMIS) has officially handed over Maslah Forward Operating Base (FOB) to the Federal Government of Somalia, ceding control of the facility it had occupied since 2012. The handover of the FOB was supported by the United Nations Support Office in Somalia (UNSOS).

The handover is in line with the joint Concept of Operations (CONOPs) and the Somali Transition Plan - developed by the Federal Government of Somalia, ATMIS, the UN and development partners to guide the transition process.

A land lease agreement formalizing the handover was signed by the Special Representative of the Chairperson of the African Union Commission (SRCC) for Somalia, Ambassador Mohamed El-Amine Souef, and Somalia’s State Minister for Defence, Abdinur Daahir Fidow, at a ceremony held in the capital, Mogadishu last Saturday.

“Today is a proud moment for us as a Mission. Maslah is the first facility to be handed over by ATMIS since its inception in 1 April 2022, following the end of the AMISOM mandate,” the SRCC said at the ceremony attended by top Federal Government of Somalia officials, envoys and representatives of the UN and troop contributing countries (TCC’s).

Ambassador Souef emphasized the key role the FOB has played in securing the capital, Mogadishu, and facilitating the Mission’s military operations.

“Geographically it has also enabled our troops to secure the major supply route (MSR) connecting Mogadishu and the hinterland hence ensuring the safe and secure movement of goods and services which is important for both economic and social development of this country,” he observed.

Speaking at the event, Somalia’s State Minister for Defence, Abdinur Fidow said the handover comes at a time when the Federal Government has intensified military operations against Al Shabab in central and south Somalia.

“Huge military gains have been achieved in the past few months and we are keen to double the current efforts and count on your support in eradicating the Al-Shabaab,” he added, reiterating the Federal Government’s commitment to the transition process.

A certificate of handover of gifted equipment and material was also signed by the Minister of Defence and the Director, United Nations Support Office in Somalia (UNSOS), Mr. Amadu Kamara  paving the way for the Federal Government to assume ownership of UN-owned equipment in the FOB.

“UNSOS, in support of the Somalia transition, will gift to FGS, any UNOE associated with ‘camp utilities and life support’ such as generators and water purification plants to sustain the operational capacity of FOBs that are being handed over, if such equipment is not required to support ATMIS formations or operations in other locations. “said Mr. Kamara.

On his part, Mr. Kamara lauded the stakeholders for making the process a success despite numerous challenges.

“The success of the handover of Maslah, notwithstanding formidable challenges, is a testament to the will of the Somalia Government to succeed, the commitment of ATMIS to support the FGS, and the unwavering support of UNSOS to ensure adequate facilitation of the Transition Plan,” Mr. Kamara.

The UNSOS Director further noted that the ceremony was a demonstration of the commitment of ATMIS to support the Federal Government of Somalia, reaffirming UNSOS unwavering support to ensure adequate facilitation of the transition plan.

“We will handover this equipment if it is not required to support ATMIS formations or operations in other locations,” he added.

In the case of Maslah, the UN handed over to SNA one water treatment plant, two generators, a water borehole and refurbished prefabs. It also constructed a gate at the main entrance of the FOB to enhance security.

The Federal Government personnel were also trained on conservation and equipment maintenance in line with the UN’s responsibility to leave a positive environmental footprint in Somalia.

Kochi:People stand on road as they watch a BBC documentary on Prime Minister Narendra Modi. #Gallery

AAP refuses to leave after adjournment of MCD House

SC strikes off magistrate’s approval condition from ‘living will’ process