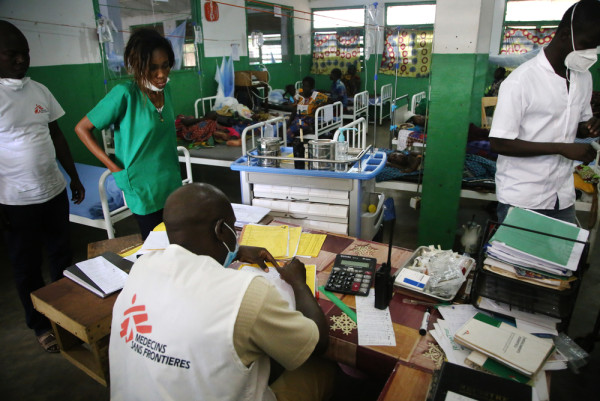 In October 2022, Médecins Sans Frontières (MSF) ended our longstanding medical project in a violent hotspot in the northwest of Central African Republic (CAR). Here are some highlights from our activities over the past 16 years.

Kabo is a town of 60,000 people close to the border with Chad. Our teams first arrived there after the former president François Bozizé took power in 2003. We had previously been running activities in nearby areas such as Moyenne Sido and Bouca.

This initial emergency response was closed after a few months, but in 2006, we returned due to a resurgence of armed violence, this time to set up stable medical projects both in Kabo and Batangafo, a town 58 km away.

Over time, we transformed the local health centre into a secondary-level hospital, while supporting health centres in nearby Moyenne Sido and Farazala. By working with the local community and slowly gaining their trust, we were able to expand our assistance.

Between 2006 and 2022 in Kabo and surrounding areas, our teams provided over 1.7 million medical consultations, half of which were for malaria – the deadliest disease in CAR.

In addition, our midwives assisted 21,000 deliveries, our psychologists saw 10,200 patients for mental health related issues, and our surgeons performed more than 3,000 surgical interventions. We also provided paediatric care, treatment for malnourished children, vaccination for babies, as well as diagnosis and follow-up of patients with HIV, TB and other chronic diseases.

“Many women came long distances to reach us. Sometimes we would see women sitting in the waiting room with labor complications for two or three days,” says Sylvain Groulx, MSF operations manager, who worked on different projects in CAR across two decades.

“They believed they would be able to deliver safely here. In the beginning, only a few women gave birth at the hospital, but now many do. This increase has contributed to the reduction of maternal mortality in a country that has the second highest maternal mortality in the world,” says Groulx.

“There were also sudden emergencies. One day, late in the evening, soldiers came urgently to alert us that a truck had overturned at the entrance of the town. Two people died and over 40 others were injured. All our staff banded together, from drivers to medics, to help as patients came rushing into the hospital,” he says.

As in other areas in CAR, Kabo has been repeatedly hit by conflict and has been controlled by different armed actors. It has hosted thousands of displaced people for years.

“Throughout my life I have suffered a lot. Since I was seven years old, the same story always repeats itself... I have been on the move a long time due to the war,” says Tanguina, who has been displaced three times in 25 years. “I have lost my belongings, my farmland, everything,” she says.

Over time the settlements, composed by hundreds of small houses made mostly of sun-dried bricks, became indistinguishable from the rest of the town.

“Sometimes during outbursts of violence people sought refuge at the hospital. There was no other place where they felt safe,” says Groulx. Other times, our staff took care of many wounded people who were caught in the crossfire of conflict.

4- Insecurity and the closure of projects

The constant insecurity in Kabo led to recurrent incidents. From kidnappings to armed robberies on the road and within the MSF base, as well as intrusions of armed men into our medical structures.

“What we experienced is nothing compared to what the people suffer every day,” says Groulx.

“We always tried to engage with all parties to the conflict, underlining the need for the protection and respect of our staff as well as civilians. However, sometimes, these incidents caused the suspension of our activities.”

A targeted attack last January by unidentified armed men against a convoy of our vehicles on the Batangafo-Kabo road set the path for the closure of the project. We suspended the movement of our teams along the route, which had been the only way to reach Kabo since the beginning of 2021, as the local airfield had been closed shortly after the conflict intensified weeks before. In February, all non-local staff were evacuated, and some activities were reduced. Without direct supervision of the remaining activities or clear visibility on when we would have secure access to the town, it was considered impossible to maintain the support indefinitely.

5- A legacy of empowering the community

Over the past 16 years, our teams continuously trained local and public health staff with the aim of increasing the autonomy of the community. Our departure from Kabo, which had originally been foreseen to come at a later stage, was finally agreed with the authorities and the Ministry of Health and Population (MoHP), who took over activities from October 2022.

In our departure, we donated equipment and medicine to Kabo hospital, and will continue to support the staff costs there, as well as at the other two health structures in the area until the end of 2023.
Distributed by APO Group on behalf of Médecins sans frontières (MSF).

Seoul :The design of a stamp that features Pyongyang’s launch of an intermediate – range ballistic missile that flew over Japan last month #Gallery

Kuala Lumpur: Police officers show their inked fingers after casting their votes in the early voting of the general election in Kuala Lumpur #Gallery

Kuala Lumpur: A police officer casts the vote in the early voting of the general election in Kuala Lumpur #Gallery

Aftab, Sharddha shifted to Chattarpur on May 15, three days before her murder

Mehrauli murder: Aftab would have killed Shraddha ten days before

Three of family die by suicide in UP

Four killed as minivan rams into truck in Andhra