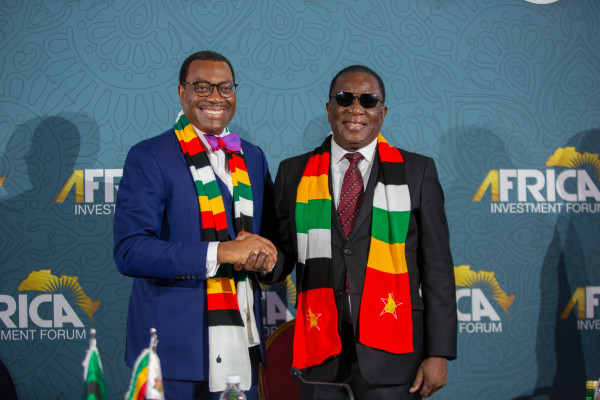 Zimbabwean President Dr. Emerson Mnangagwa has called on investors to realize the massive investment opportunities in Zimbabwe and shun negative perceptions of risk.

Zimbabwe, self-sufficient in food production and a major exporter of wheat, tobacco, and corn to the 14-member Southern African Development Community, to other African countries and the wider world before 2000, saw its exports plummet. Before 2000, farming accounted for 40% of all Zimbabwe’s exports. In 2010 though, it dropped to 2%.

“The focus is to persuade global capital assembled in this city to realize that there are opportunities for investment in Zimbabwe,” President Mnangagwa said.

The African Development Bank and its seven partners set up the Africa Investment Forum—Africa’s premier investment platform—to attract investment and capital to Africa. The forum’s Market Days 2022 which runs from the 2nd to 4th of November, feature boardroom sessions that promote flagship sectors where Africa has a comparative advantage. Examples are women-led businesses, music, film, fashion, textiles, and sports.

“Our mission here is to explain ourselves, assure investors that Zimbabwe is a safe investment destination,” President Mnangagwa said.

Adesina said Zimbabwe could count on the African Development Bank’s strong support. He confirmed the bank’s approval of a $4 million grant to support the development of a secretariat to move the country’s debt arrears clearance issue forward.

Adesina outlined the country’s many potential areas for investment, including steel, agriculture and information technology. He said the bank was lending support in these and other sectors.

The African Development Bank also made a grant to Zimbabwe during the Covid-19 pandemic, stepping in where other institutions had not.

“Zimbabwe is strongly committed... Zimbabwe will again be the breadbasket of Africa. I will swim right beside you,” he said.

Ncube said the Zimbabwe Investment and Development agency (ZIDA) was the country’s one-stop shop for potential investors. “With ZIDA, your investment is safe...we have the capacity…we are waiting for you,” the finance minister said.

Nzenza said the country was focusing especially on mining, agriculture, tourism and manufacturing, such as producing cotton, locally and lithium batteries.

“There’s no doubt that sanctions hurt, but Zimbabwe is open for business. The key words are value addition…we have been exporting raw materials we must manufacture,” Nzenza said.

Masuka said in his opinion, the biggest opportunity was the land reform program that Zimbabwe had embarked on. The government has put agriculture at the top of its agenda. “We want to develop agriculture…there are massive opportunities. Agriculture will power our way to achieving vision 2030,” Masuka said.

George Manyere of Brainworks Ltd said Zimbabwe’s economic performance against neighboring countries like Zambia, Malawi and Mozambique—which do not have sanctions and enjoy support from the international lending community—was proof of the nation’s capacity to perform despite perceptions of risk, and the country’s biggest selling point.

Tshepidi Moremong, Chief Operating Officer of Africa50 noted the progress and opportunities in transport, logistics, infrastructure.  She said that following a mission to Harare last month, Africa50 would be signing a memorandum of understanding, specifically on asset recycling.

Kapesh Pattel of SteelMakers Group advised that getting out in front of investors would help to demystify negative and misleading perceptions of Zimbabwe.

Delhi primary schools to be closed from Saturday due to pollution: Kejriwal

Dems wheel out heavy artillery Obama to save face in midterms