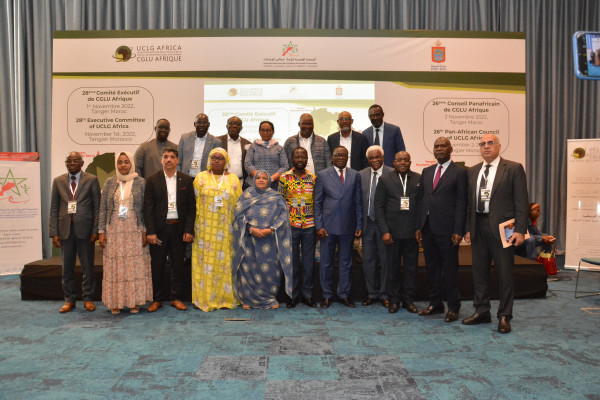 The 28th session of the Executive Committee and the 26th session of the Pan-African Council of United Cities and Local Governments of Africa (UCLG Africa) (http://www.UCLGA.org) were held as ordinary sessions in Tangiers, Morocco, on November 01 and 02, 2022.

Both meetings were chaired by Ms. Fatimetou Abdel Malick, President of the Region of Nouakchott (Mauritania) and President of UCLG Africa.

"Our meeting today in Tangiers has more than one connotation and meaning, for a city that has symbolic significance in terms of history and geography, being the gateway to Africa from Europe and the exit door from Africa to Europe. If this city is destined to be a place of civilizational cross-fertilization, it must also be the voice of the peoples of Africa, in particular the voice of its local elected officials, convinced of the need to meet the challenges of development”, said the president of the AMPCC, Mr. Mounir Lymouri.

The President of UCLG Africa thanked His Majesty King Mohammed VI for the constant support He has provided to the umbrella organization of African local and regional governments.

"I would like to express the gratitude of UCLG Africa to His Majesty King Mohammed VI, for the constant support our organization has received since the installation of its headquarters in Rabat, in January 2008. I would also like to thank the Government of the Kingdom of Morocco for the multifaceted support provided to our organization. We are preparing to participate in the COP27, to be held in Sharm el-Sheikh on African soil in Egypt. We must together during this Adaptation COP plead for the materialization of the commitments of the Paris Agreement. Adaptation is above all a territorial issue. We invite you to participate massively in COP27. We would like to thank the partners who support us in our efforts and especially the European Union with whom we signed a new Framework Partnership Agreement on September 12, 2022 in Brussels”, said Ms. Fatimetou Abdel Malick.

The report of the activities carried out by the General Secretariat of UCLG Africa since the holding of the 26th session of the Executive Committee in August 2022, and since the meeting of the General Assembly in May 2022 in Kisumu, Kenya, was approved. The Executive Committee also adopted the 2023-2024 work plan and the 2023 budget of UCLG Africa.

The Executive Committee as well as the Pan-African Council members received detailed clarifications on the activities implemented by the General Secretariat of UCLG Africa, particularly with regard to Africa's participation in the UCLG World Congress which took place from 10 to October 14, 2022 in Daejeon (South Korea), and the preparation of the participation of UCLG Africa members in the 27th Conference of the Parties to the United Nations Framework Convention on Climate Change (COP27) scheduled from November 06 to November 18, 2022 in Sharm el-Sheikh (Egypt).

The members of the two governing bodies of UCLG Africa were informed of the progress made to strengthen the role of local authorities in Africa in climate action. During its meeting held in Dakar, Senegal, from 12 to 16 September 2022, the African Ministerial Conference on the Environment (AMCEN) granted UCLG Africa the status of implementing agency of AMCEN. During this same meeting, the Secretary General had a bilateral meeting with the U.S. Special Presidential Envoy for Climate, His Excellency Mr. John Kerry, who confirmed the interest of the United States to support the Africa Adaptation Initiative (AAI) and the hosting of the technical support unit of the AAI within the UCLG Africa Regional office for North Africa (UCLG Africa NARO). UCLG Africa is also an implementation partner of the Green Climate Fund and will conduct a pilot experiment in the territorialization of Morocco's Nationally Determined Contributions (NDCs) in the Souss-Massa Region.

UCLG Africa has a pavilion in the Blue Zone at COP 27. This pavilion will be the rallying point for African local authorities present at COP27. All the delegates of local and regional governments of Africa are encouraged to use this space for their bilateral meetings or for their potential meetings. African delegates are also encouraged to participate in the sessions organized by UCLG Africa, in particular in its pavilion in the Blue Zone of COP27.

Participants were pleased that during the UCLG World Congress in Daejeon, South Korea, five members of UCLG Africa were promoted to positions of responsibility within the world organization. Taking into account this strong presence of Africa in the governing bodies of UCLG, the members of UCLG Africa were encouraged to take a greater part in the commissions and working groups of UCLG, including by running for the position of Chair or Vice-chair of said committees. The committees and working groups are in fact the places where the policies and strategies of the world organization are drawn up.

The leadership of UCLG Africa was also informed of the progress made in the operationalization of the Africa Territorial Agency (ATA) which becomes the Africa Territorial Agency for Trade and Investment in Africa (ATIA, Africa Territorial Trade and Investment Agency), a financial vehicle intended to facilitate the access of local authorities in Africa to the financial market and their contribution to the development of intra-African trade and the creation of the African Continental Free Trade Area (AfCFTA). A draft Memorandum of Understanding is being negotiated concerning this subject with Afreximbank. In addition, the African Development Bank (AfDB) has agreed to finance a training program for local authorities' access to the capital market for chief financial officers in cities and territories of Africa. A first training cycle was held in September 2022 in Abidjan, Côte d'Ivoire. A second cycle is planned for Johannesburg in early 2023.

UCLG Africa aims to significantly improve the capacities and professionalism of elected officials and staff of local authorities in Africa. This is why the umbrella organization has developed an e-learning platform within the African Local Government Academy (ALGA). The courses are digitalized and each national association has the possibility of customizing the tools according to its own needs.

Other achievements include the launch of the Forum of African Regions (FORAF) in September 2022 in Saidia (Morocco) and that of the network of Young Local Elected Officials from Africa (YELO).

Eight projects were presented to the members of the Executive Committee and  of the Pan-African Council: The city of Berkane's Smart City experience; the “Building Climate Resilience for the Urban Poor Globally and Regionally” (BCRUP) initiative; the operationalization of the partnership between UCLG Africa and PACJA (Panafrican Climate Justice Alliance); Innovation in policy dialogue: the experience of Mauritania ; the African Territorial Agency for Trade and Investment (ATIA); the support tools of the African import-export bank (Afreximbank); the African Network of Urban Agencies; and the Trombino Platform of UCLG Africa.

Signing of an MoU

During the opening ceremony of the Executive Committee, the Moroccan Association of Presidents of Communal Councils (AMPCC) and the Union of Cities and Communes of Côte d'Ivoire (UVICOCI) signed a Memorandum of Understanding, which was signed respectively by Mr. Mounir Lymouri , President of the AMPCC, and Mr. Claude Paulin Danho, President of UVICOCI.

On the sidelines of the two statutory meetings of UCLG Africa, the meeting of members of the Presidency of the Network of Locally Elected Women of Africa (REFELA) and that of the Forum of African Regions (FORAF) were held in parallel.

Distributed by APO Group on behalf of United Cities and Local Governments of Africa (UCLG Africa).

About UCLG Africa :
United Cities and Local Governments of Africa (UCLG Africa) is the umbrella organization of local authorities in Africa whose founding congress took place in 2005 in the city of Tshwane, South Africa. UCLG Africa stems from the unification of three continental groupings of local governments following the official language inherited from the colonial period, namely: the African Union of Local Authorities (AULA ), mainly English-speaking; the Union of African Cities (UVA), essentially French-speaking; and the Africa chapter of the União das Cidades e Capitais Lusófonas Africanas, Americanas e Asiáticas ( UCCLA ), mainly Portuguese-speaking. UCLG Africa currently brings together the 51 national associations of local governments operating in Africa as well as 2,000 cities and territories with more than 100,000 inhabitants. Through its members, UCLG Africa represents more than 350 million African citizens. A founding member of the world organization of United Cities and Local Governments (UCLG), UCLG Africa is its regional chapter for Africa. The General Secretariat of the organization is established in Rabat, capital of the Kingdom of Morocco, where UCLG Africa enjoys diplomatic status as a Pan-African International Organization. UCLG Africa is also represented in the five regions of Africa through regional offices established: in Cairo, Egypt, for the North Africa Region; in Accra, Ghana, for the West Africa Region; in Libreville, Gabon, for the Central Africa Region; in Nairobi, Kenya, for the Eastern Africa Region; and in Pretoria, South Africa, for the Southern Africa Region.