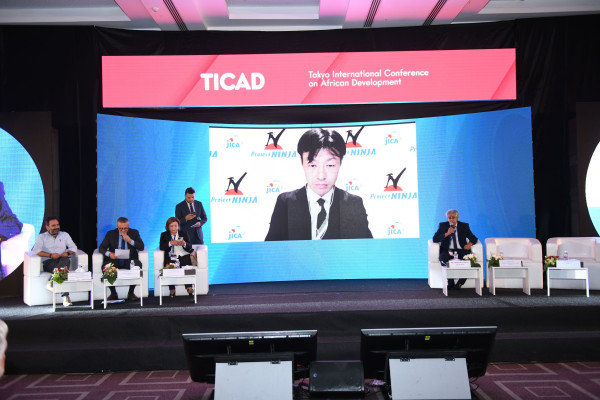 The Ministry of Industry, Mines and Energy, in collaboration with the Ministry of Higher Education and Scientific Research and under the chairmanship of the Head of Government, Najla Bouden, organized on 1 and 02 September 2022, the event TUNISIA TICAD INNOVATION 2022 "Crossroads of Business and Innovation in Africa. In this context, the Head of Government presided over the opening of the International Exhibition of Innovation, Research and Invention, as well as the award ceremony of the 3rd edition of the National Competition of Invention and the 1st World Championship of Invention and Scientific Research, as part of the parallel events to the Tokyo Conference for Development in Africa -TICAD 8. These events were organized by the Agency for the Promotion of Industry and Innovation (APII) (http://www.TunisieIndustrie.nat.tn), in the presence of the ambassadors of Japan, Egypt and the European Union, the President of UTICA, high-level official delegations, national and international organizations, institutions and funding and investors.

The exhibition saw the participation of 15 countries of different nationalities, including African countries, among which Tunisia. The best innovations and research candidates for the third edition of the National Competition of Invention and the first World Championship of Invention and Scientific Research, as well as startups and innovative companies especially in the sectors and services of automotive components and aerospace, were reviewed, in addition to the participation of support structures involved in the system of innovation, research and technology promotion.

The Prime Minister together with the Minister of Industry, Mines and Energy presented the prizes to the winners of the National Invention Competition in its third edition and the World Invention Championship, both competitions were evaluated by an international jury of experts of different nationalities, the results of which resulted in the crowning of a set of individual and institutional inventions within the framework of the national competition and the victory of candidates from different countries within the framework of the World Invention Championship, as follows :

Invention : Propeller alternator that charges the batteries of electric cars

Invention : Lebecetin (LCT), a molecule derived from snake venom, as a neovascularization inhibitor in the treatment of ocular diseases, cancers or inflammatory disorders with neovascular component

Invention : Process for obtaining a meat bioconservative based on a natural colorant

Invention : Development of an intensive breeding system of edible insect species to initiate the basis of tomorrow's human and animal food.

These prizes were awarded by the European Union, the African Development Bank, the World Bank, the Deposit and Consignment Office, the Abdelwahab Ben Ayed Foundation, the structures and support institutions under the Ministry of Industry, Mines and Energy, as well as by the Global Universal Innovations (GOIDI) and the International Federation of Invention (IFIA)

The Prime Minister also visited the pavilion of startups specializing in technology sectors and useful innovations in the fields of environment, green economy, artificial intelligence and health. She also visited the Automotive Hackathon area, which brings together several teams of engineers specialized in the field of information software for the development of innovative software in the automotive components sector, which allowed her to meet young innovative creators capable of creating inventions with high added value for the future of a smart industry based on innovative and groundbreaking rules.

The following is a list of the winners of the awards presented by the Minister of Industry, Mines and Energy and awarded by the German Cooperation Program:

As the results expected by the challenge holder and the organizers were not achieved, the first prize for the selected challenge (will not be awarded)

Mastery of the requirements in terms of "carbon Foot print"

Among the side events organized is a matchmaking gathering of startups in the fields of technological innovation, under the joint organization of the APII and the Startup Tunisia Foundation, which focuses on the promotion of projects, the creation of a space for exchange and networking of young researchers and funding. These projects include:

Recommendations from the TUNISIA TICAD INNOVATION 2022:

1/ Perpetuate TTINN 2022 to ensure annual follow-up of the TICAD International Conference preparatory actions focusing on economic themes and priorities for Africa's transformation through innovation and industrialization.

2/ Consolidate through the establishment of the Africa-Japan Symposium on Society, Science and Technology (AFJASSST), a multidisciplinary international conference, which will focus on economic, technical, scientific and technological innovation in partnership with TICAD member countries.

3/ Establishing a network of technoparks, incubators and school innovation centers:

This includes the establishment of networks of technoparks, schools, high schools, universities and incubators connected in Africa for the promotion of regional and international partnerships in all high value-added sectors and investments in knowledge and innovation with TICAD countries and the rest of the world, drawing on Japanese expertise in this field.

4/ Creation and launching of the initiative of creating an Invention Industrialization Fund and a platform bringing together researchers and industrialists on the African continent.

All these events will only be possible if a national and international steering committee associated with the TICAD organizing committee is quickly set up in partnership with the countries of the African continent.

It is worth highlighting that the event featured several workshops on various industry and innovation axes, including one on technology transfer strategies, another on water, energy and material sciences for sustainable development in Africa, as well as on biotechnology, health, food, agriculture, information and communication technologies, as well as innovative relationships between personal medicine, genetic engineering, nanotechnology and innovations, and the Crowdfunding project.

Of the 2,985 who registered, 1,583 attended the event, with 764 online attendees, 253 partnership applications and 89 exhibitors. The organizers of the event have sought to strengthen the role of Tunisia as a strategic partner of Africa and promote its presence in the scientific field to the international community, in partnership with Japan and the TICAD countries, and technology transfer to developing countries.
Distributed by APO Group on behalf of Agence de Promotion de l'Industrie et de l'Innovation.

Amritsar: A farmer burns paddy stubble at a farm #Gallery

Kolkata: A representative of UNESCO poses in front of the Goddess Durga idol #Gallery

Sonitpur: Union Minister for Law and Justice Kiren Rijiju during his visit to the new Kaliabhomora bridge #Gallery

Kolkata: An artist paints an Idol of Goddess Durga #Gallery

Pilot asked to be in Jaipur till final decision taken

Draft telecom bill to be finalised within 6-10 months: Minister