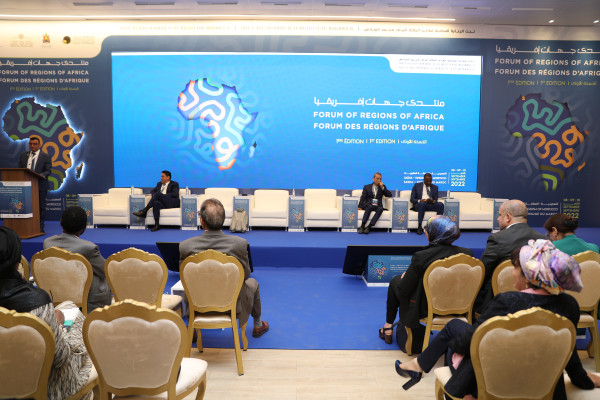 The organisation of the very first Forum of the Regions of Africa at the continental level proved to be a success. Held in Saïdia, in the Oriental region of Morocco, the forum took place on September 8th and 9th, 2022. Around 500 delegates, from 30 countries including 21 African countries, and more than 80 Presidents of African regional governments participated in the event that “was an historical event” according to many.

The praise for this fruitful first edition organised by United Cities and Local Governments of Africa (UCLG Africa), in collaboration with the Association of Moroccan Region (ARM), the Oriental Regional Council (CRO) and the Ministry of Interior (through the DGCT) went along with a massive expression of gratitude from the majority of the participants towards the Moroccan authorities in general, and particularly towards His Majesty, King Mohammed VI.

This acknowledgement of gratitude was also expressed in the “Saïdia Declaration” read by Professor Anyang  Nyong’o, Governor of Kisumu County in Kenya, which highlighted the need to make the regions of Africa structuring clusters of sustainable development on the continent and important milestones in the building of “the integrated Africa We want”. The “Saïdia Declaration” also affirmed the importance to call on national governments and development partners to make sure that the financial means of implementation of national public policies and global agendas reach the budgets of regional governments.

One of the key moments of this closing day was the presentation of the FORAF Roadmap which was drafted to give concrete objectives to all the presidents of the regions of Africa and invited them to strengthen their regional governments, financially, technically and democratically. The actions presented in the Roadmap took into account the ten-year plan of UCLG Africa, also known as GADEPPA 2.0. The Participants committed to collaborate with the African Continental Free Trade Area (AfCTA) secretariat and Afreximbank and encouraged the UCLG Africa secretariat to conclude a MoU with the aforementioned institutions. The Roadmap will be translated into an action plan that will be worked out by a working group composed of five (5) members, one (1) per region. This work plan will be presented during the Panafrican Council of UCLG Africa to be held in Tangiers, from November 1st to 3rd, 2022.

The office bearers of the FORAF was elected during the assembly held on September 9, 2022. The Executive Bureau of the FORAF is now composed of four vice-presidents (of Amoron’i Mania Region Madagascar, represented by her Président, Madam Aline Mamiarosa; the Association of the Regions of Morocco represented by her President, Madam Bouaida Mbarka, President of the Guelmin Region, Morocco; the North Region, Cameroon, represented by his President, Mr Oumarou Ousmanou; the Gauteng Province, South Africa, represented by its Premier, Mr. David Makhura (who was represented by Mr. Lebogang Maile, MEC of Gauteng Province, South Africa); and as President, the Forum of Governors of Nigeria represented by Dr John Olukayode Fayemi, Governor of Ekiti State, Nigeria. In his acceptance speech, the new president-elect of the FORAF emphasised that “it is about time that Africans stop agonising and start organising!”. The Forum of the Regions of Africa is a concrete first step leading to the emergence of the “Africa of the Peoples” called for by Agenda 2063 of the African Union, and a major shift for a bright future of the continent.

Amritsar: Farmers shout slogans as they protest against the state government #Gallery

TN govt on alert over smuggling of ration rice to Kerala