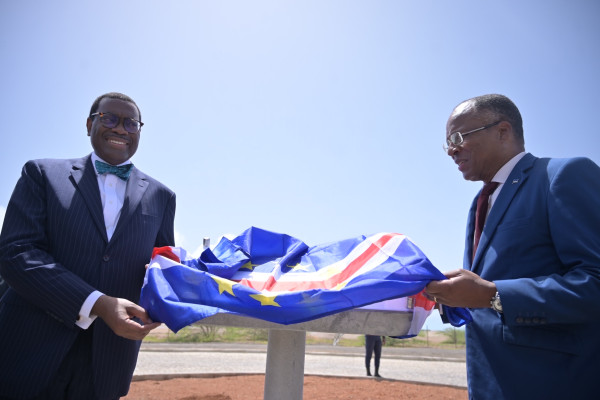 The modernization of the Ports of Maio and Palmeira cost €36 million, with the African Development Bank providing €17.87 million. The Bank’s strategic partner, the European Union, provided €11 million in support, while the Cabo Verde government’s share of the funding was €7.8 million.

“An investment like this brings rapid changes to livelihoods and transforms economies. It will connect Maio with the rest of the country and the world,” said Prime Minister José Ulisses de Pina Correia e Silva.

“Maio has great potential for sustainable tourism and a good balance between the environment and the economy. We look forward to future collaboration with the Bank and other partners in this regard,” he added.

Adesina said the port inauguration marked another milestone for the resilient West African nation. “This beautiful port will transform the face of the economy of Maio. It will become better connected to the rest of the country, rapidly expanding business and economic opportunities and boosting tourism,” Adesina said.

It used to take three hours to travel to Maio from Praia by sea. With the upgraded port of Maio, it will now take less than one hour. The project is also expected to make it a lot easier to sell salt, cheese, fish and other key commodities.

The port modernization project entailed the rehabilitation of the jetty, the construction of a roll-on, roll-off platform for ships, and access roads. It is also supporting women’s associations in the production of salt, milk, and cheese in Maio, and a training center is being built to train young entrepreneurs in the tourism sector.

The European Union’s director of international cooperation and policy, Felix Fernandez Shaw, said the port would help Cabo Verde resume its trajectory of sustainable growth and unlock opportunities for sustainable tourism and access to regional markets.

Adesina commended the government for its proactiveness in tackling the Covid-19 pandemic, which impacted the economy heavily, particularly tourism. In 2020, the African Development Bank provided €30 million to fund the country’s Covid-19 response, helping Cabo Verde exceed expectations on its vaccination program. Over 84% of the population are vaccinated, which is way above the 18% average for Africa.

The country has also recovered significantly from the pandemic, recording GDP growth of 7.1% in 2021.

The African Development Bank is also financing transformations in other sectors of the country’s economy. The Bank’s €30 million financing for the modernization of the Praia airport has expanded passenger traffic by 150%. A power project co-financed with the Japan International Cooperation Agency provided electricity to over 10,000 people. Another partnership with the European Investment Bank and other partners financed the €63 million Cabeolica wind power plant. The project now supplies 20% of the nation’s electricity. This has made Cabo Verde a model country for clean energy.