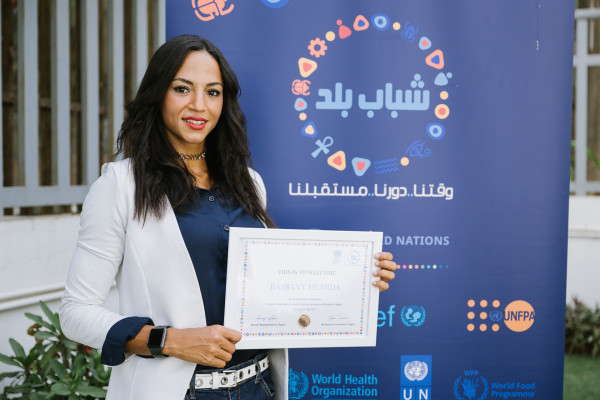 The gold winner Egyptian sprinter Bassant Hemida was appointed as an ambassador for the UN global initiative Generation Unlimited (Genu) in Egypt, Shabab Balad, which is a multi-lateral platform aiming to unite efforts and direct investments for the benefit of the youth in Egypt and moving them from learning to earning and having positive impact in the society.

Genu was launched by the UN in 2018 as the world’s first Public-Private-Youth Partnership (PPYP) aiming to skill and connect all of the world’s 1.8 billion young people aged 10-24 to opportunities for employment, entrepreneurship, and positive social impact by 2030. The number of this age group in Egypt is 28 million young men and women, about 27% of the population.

Shabab Balad was successfully launched during the World Youth Forum held in Sharm El-Sheikh last January under the auspices of His Excellency President Abdel Fattah Sisi.

Athlete Bassant Hemida has made history at the 2022 Mediterranean Games in Oran, Algeria, becoming the first Egyptian to ever win gold in the 100m sprint. She went on to claim her second gold medal in the 200m sprint.

In her new role, Hemida will support Shabab Balad work for the youth in Egypt and promote the importance of educating, training, skilling and connecting them to the employment opportunities as well as instilling the entrepreneurship concept among the youth.

"Raising awareness of the initiative requires the solidarity of various parties in society, especially the voices inspiring the young people. We are pleased to have the champion sprinter Bassant Hemida join Shabab Balad initiative and looking to have more influencers and opinion leaders joining to help get the message delivered,” Jeremy Hopkins, the UNICEF Representative in Egypt said.

"It is a great honor to have a role in a global initiative for youth in Egypt, that makes them a priority and helps them develop their skills, achieve their ambitions and positively participate in society," said Basant Hemeida, Ambassador of the United Nations Global Initiative in Egypt “Shabab Balad”.

“Young people always carry the torch of hope for a better tomorrow, and it is great to have such a platform that unites the efforts of various parties for the benefit of young people,” she added.
Distributed by APO Group on behalf of United Nations In Egypt.

: Beirut : Aftermath of the floods in Iran #Gallery

‘Accusing doctors as if they were killers’, SC on Ramdev ads against allopathy