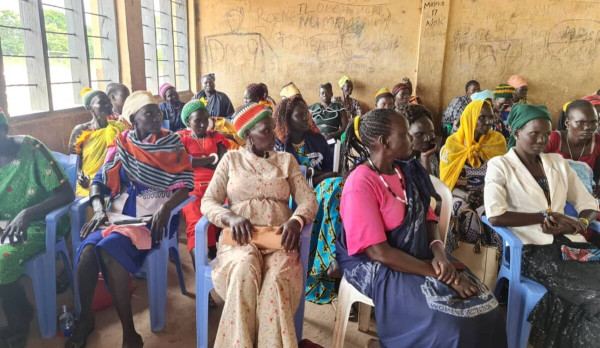 With the extension of the ongoing transitional period in South Sudan and the agreement on a roadmap to achieve key benchmarks contained within the Revitalized Peace Agreement, full and equal participation of women in peace processes has become more important than ever before.

To this end, the United Nations Mission in South Sudan (UNMISS) partnered with the Bridge Youth and Women’s Empowerment (BYWE), a national not-for-profit to organize a three-day forum for women in remote Aliamtoc, Lakes state.

The main aim of the gathering: To enhance peaceful coexistence and engage in productive discussions on the specific issues faced by women and girls during active conflict.

Some 50 women came together to speak about the challenges they have faced.

“Women and young girls have been disproportionately affected by violence in South Sudan,” revealed Agoot Mabeny, a participant.

“We have been raped; our husbands, fathers and sons have been killed; and most of us did not get the chance to finish our education,” she stated passionately. “This must change.”

“Critically, we play a vital role in encouraging reconciliation and peace in our communities but because of South Sudan’s patriarchal culture, we haven’t been able to play a central role in building harmony from the grassroots,” added Agoot.

Agoot’s concerns were echoed innumerable times by others participating in this three-day platform, facilitated jointly by BYWE and members of the UN Peacekeeping mission’s Civil Affairs Division.

Topics covered included examining their own role in intercommunal violence; acknowledging the need for justice and accountability; assessing existing conflicts dynamics and deliberating on progress made so far in restoring a lasting peace in the area.

“Women are natural peacebuilders,” said Angelina Ding Mario, state Minister of Gender, Child, and Social Welfare, who urged participants to put aside their differences and work towards promoting cohesive communities.

“I urge all of you to use the influence you have on your children, on young people, to spread a culture of peace and non-violence. Peace is the building block on which progress, development, and prosperity depend. So, let’s work together to be true champions of reconciliation and healing for future generations,” she stated eloquently.

“As women, you are the backbone of the family unit. You have a massively influential role to play as grassroots peace brokers. I understand that many of you have suffered a lot. It is, therefore, incumbent upon you to make sure no girl goes through what you have,” averred Mr. Kuoi with compassion.

He further encouraged women to establish an early warning system and response to mitigate and prevent conflicts in partnership with men in their communities, thereby creating a whole-of-society approach to peacebuilding.

“Rumbek east has been the epicentre of conflict-related issues and much needs to be done here but it is heartening to see all the women of Aliamtoc come together for peace. Peace cannot be built in a day, and it most certainly won’t come by force. Peace begins with each of you so always make sure you hold the flag of forgiveness high,” he said.

The forum passed five resolutions which included the formation of the Aliamtoc-1 Women’s Peace and Reconciliation Committee, supported by the state government and peace partners; ending harmful cultural practices such as early and forced marriages; and calling upon community leaders in neighbouring areas such as Maleng Agok and Cueicok to lead reconciliation efforts.
Distributed by APO Group on behalf of United Nations Mission in South Sudan (UNMISS).

:Bengaluru:Members of Various organizations protest against the release of 11 convicts. #Gallery

Only 1% Indians plan to buy e-scooters in next 6 months, safety top concern

‘Number of lawyers has dwindled’: CJI on legal professionals in legislative bodies