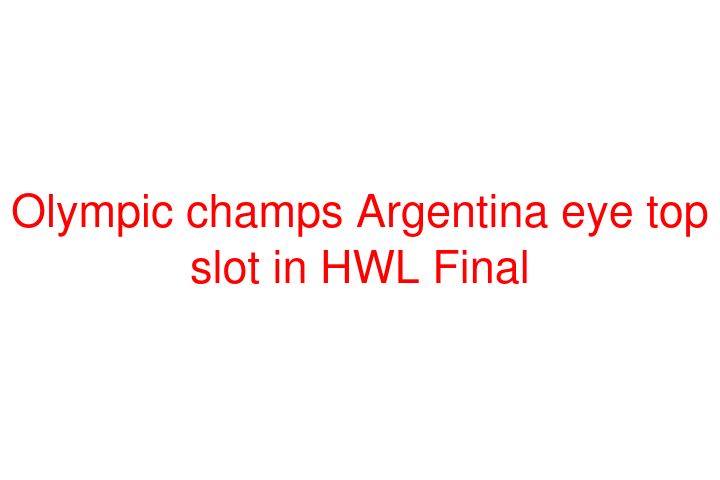 Bhubaneswar, Nov 27 (IANS) Olympic Champions and current World No.1 Argentina, who arrived for the prestigious Hockey World League (HWL) on Monday, said they will be vying to stay on top of the world ranking.

"Despite a long journey and the tiredness, the team is extremely excited to be here in India. This is a big competition and for us it's important to stay No.1 in the world which means we have to ensure best results in every match," stated 27-year-old Agustin Mazzilli.

Germany, who are grouped with India in Pool B, also arrived on Monday.

The tournament is scheduled to begin on December 1 at the Kalinga Stadium here.

Having been here in Bhubaneswar earlier this year for the Hockey India League, Mazzilli said, "It is always a pleasure returning to India. People here love hockey and it's a great atmosphere to play in Bhubaneswar."

Speaking about the Indian line-up, Mazzilli said, "I have played with everyone on the team and some of the youngsters who have come into the mix are extremely good."

Argentina are grouped with Belgium, Netherlands and Spain in Pool A and will play their first match on December 2 against Belgium.

Meanwhile, Stefan Kermas, Head Coach of Germany, on arriving in Bhubaneswar said, "I would like our team to play in this atmosphere here and get used to the conditions before we come back next year to play the World Cup. We are looking forward to a good tournament and playing the teams, we haven't played this year."

Defending champions Australia, Olympic silver medallists Belgium and World No.7 England have already arrived in Bhubaneswar for the tournament.

STR’s Periyar Kuthu Song Will Be Out Tomorrow

India to open another bridge near China border on Dec 25