Singapore, Nov 1 (IANS) Sania Mirza and Martina Hingis came up with another stupendous performance on Sunday to win the women's doubles title of the prestigious $7 million WTA Finals at the Singapore Indoor Stadium here and comprehensively underline their supremacy in the category. 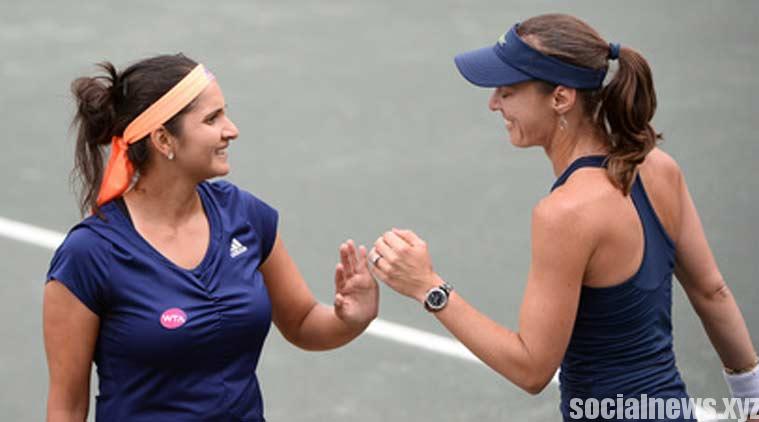 The top seeds took just an hour and seven minutes to rout Spanish eighth seeds Garbine Muguruza and Carla Suarez Navarro 6-0, 6-3 in the summit clash. This is the Indo-Swiss combine's first year-ending title together though the 28-year-old Sania won the crown last year too with Zimbabwe's Cara Black.

Sania and Martina, individually ranked the world's two highest doubles players, didn't lose a set, let alone a match, in the five ties they played in the tournament this week.

"On court, off court, we have a lot of fun. To play in tournaments like this is what we've fought all our lives for and it's incredible to play in front of a packed stadium. We feel very fortunate. We've done some amazing things together and it's the perfect way to end the year for us," said Sania.

This is the pair's ninth title together this season, having also won in Beijing, Wuhan, Guangzhou, US Open (New York), Wimbledon (London), Charleston, Miami and Indian Wells. Their only loss in a final was at Rome.

Sania also reached the final in Doha with Chinese Taipei's Su-Wei Hsieh and lost but won in Sydney with American Bethanie Mattek-Sands earlier.

This is Martina's 50th WTA doubles title, a milestone only 15 players have reached yet.

The pair has been in such sublime form that they have now won 22 matches in a row, having last lost in August to Hao-Ching Chan and Yung-Jan Chan in Cincinnati.

On Sunday, the first set saw the top seeds thrash the Spanish girls as they converted all the three breakpoints received to clinch all six games played in the set.

The only highlight for the eighth seeds was the one breakpoint opportunity they received, which was easily saved by Sania and Martina.

The Indo-Swiss pair took the momentum into the second set. They broke the Spaniards once and won on their own serve twice to make it 3-0, winning all nine games played in the match till then.

However, Garbine and Carla finally found some legs to break their opponents and make it 1-3.

Later, serving to save the match at 2-5, the Spanish girls were 0-40 down, handing three matchpoints to Sania and Martina. The top seeds, however, wasted all the chances and had to wait till their own service game to seal the deal.

"It's incredible. I feel like it was a perfect day. The energy was a bit better in practice and Sania just played out of her mind. She was everywhere today - on her side, behind me - it's about choosing the right partner," said Martina.

The WTA Finals is an annual event played by the top-8 players/pairs of the year who are divided into two round robin groups -- red and white. The top-2 of each group progresses to the semi-finals and the winners to the finals.

The championship is generally considered the fifth most prestigious event on the women's tour after the four Grand Slam tournaments. It also has the largest prize money and ranking points after the Grand Slams.