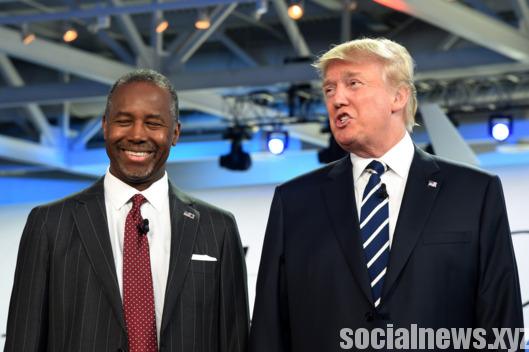 Washington, Oct 27 (IANS) For the first time in the 2016 US presidential race, retired neurosurgeon Ben Carson has pushed ahead of real estate mogul and reality TV star Donald Trump in the Republican field in a new national poll.

The latest poll from the New York Times and CBS News released on Tuesday found 26 percent of Republican primary voters back Carson, giving him a four-point edge over Trump with 22 percent.

Though Carson's new found edge falls between the margin of error of 6 percentage points, it's worth noting that support for him has quadrupled since August.

The poll coming just a day before the third Republican presidential debate found the rest of party presidential candidates lagging far behind in single digits.

Florida Senator Marco Rubio is now in third place with eight percent, followed by former Texas governor and establishment favourite Jeb Bush and former HP CEO Carly Fiorina both at seven percent. All other candidates are at four percent or lower.

But despite the slip in the polls, Trump reiterated Tuesday that he's in the race to win. "I'm in it to the end," he said on MSNBC.

Uncharacteristically, he even conceded that "it's certainly a possibility" he won't be the eventual nominee.

Trump said Carson may now face the spotlight he has been under for months and hinted that he could dip into his billions if the going gets tough. "At the right time," Trump said, "I'm willing to spend whatever is necessary".

Carson has made gains across many key Republican groups. In a reversal from earlier this month, he is now ahead of Trump among women and is running neck and neck with him among men.

Carson's support among evangelicals has risen and he now leads Trump by more than 20 points with this group. He also performed well among conservative Republicans and those who identify as Tea partiers.

Trump does well with moderates and leads Carson among those without a college degree - although Trump had a larger advantage with non-college graduates earlier this month.

While Carson may have moved to the top of the pack, Trump's supporters are more firm in their candidate choice than Carson's.

More than half of Trump voters say their minds are made up about which candidate to back, compared to 19 percent who are currently backing Carson, CBS said.