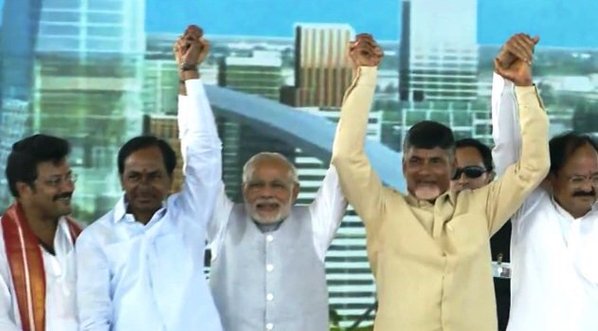 Hyderabad, Oct 23 (PTI) A day after Chief Ministers of Andhra Pradesh and Telangana shared dais setting aside their political differences, Union Minister M Venkaiah Naidu today urged the two leaders to strive to strengthen the fraternal ties between the two states whose destinies are bound together.

"You can change your friends but not neighbours. We are not just neighbours but brothers who were together. Even if brothers in a family separate, there are some problems. Such problems have to be solved with the help of elders," Naidu said.

"If the Chief Ministers start the process of finding solutions, then friendship is further strengthened," he said.

Their bonhomie was appreciated by the Prime Minister in his speech at the foundation-laying event.

Driving home the point that Telangana and AP should have cordial relations, Modi had said that both share the "Telugu soul" though they are different states.

The ruling Telugu Desam Party in Andhra Pradesh and the Telangana Rashtra Samiti in Telangana have sparred over a host of issues, including the alleged cash-for-vote scandal involving a TDP MLA and the alleged defection of some TDP legislators to TRS in Telangana.

Leaders of the ruling parties in the two states had also engaged in garrulous wranglings on vital issues like sharing of river water and electricity.

Will donors still back Trump for the 2024 presidential run?

Parties must work with spirit of ‘nation first’: President Kovind

WHO declares monkeypox a global emergency