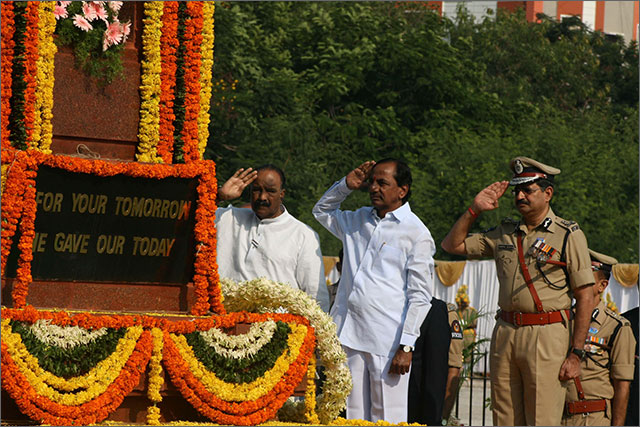 Hyderabad, Oct 21 (IANS) Rich tributes were paid on Wednesday to policemen who laid down their lives in the line of duty on the Police Commemoration Day in both Telangana and Andhra Pradesh.

Telangana Governor E.S.L. Narasimhan and Chief Minister K. Chandrasekhar Rao laid wreaths at the martyr's memorial at Goshamahal Stadium, where a parade was held to mark the occasion.

Speaking on the occasion, the chief minister said the society would also remain indebted to policemen for providing it the protection and even sacrificing their lives while performing their duty.

Stating that peace is a must for development of the state, the chief minister said the government would deal firmly with terrorism, extremism, communalism and white-collar crimes.

KCR, as the chief minister is popularly known, said police should work for the development of the newly-created state. He said a foundation stone would be laid soon for a 24-storey command and control centre in Hyderabad.

He announced a string of measures for the welfare of police force. Police constables, head constables, assistant sub-inspectors, home guards and ex-servicemen will be allotted 10 percent houses under two-bedroom housing scheme of the government. House sites will be allocated for sub-inspectors and other police officials.

Annual uniform allowance for police personnel has been increased from Rs.3,500 to Rs.7,500. Housing sites allotted by the government for the families of police martyrs will be exempted from the registration fee.

KCR said since traffic policemen spend several hours in the polluted atmosphere to regulate the city traffic, the government has decided to pay them pollution allowance, which will be 30 percent of their basic pay.

As many as 443 police personnel laid down their lives this year in India. They include four policemen in Telangana. 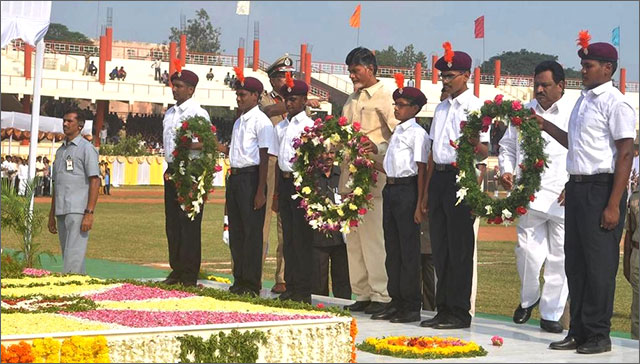 Naidu announced Rs.15 crore for the welfare of police personnel. He asked the police to be accessible to the poor and those from the Scheduled Castes and the Scheduled Tribes and other weaker sections to solve their problems.

The chief minister said police should be on guard to maintain law and order as it was necessary to bring investments to the state.