Home » Movies » Other » A Bollywood Twist to ‘Rejuvenate’ Ramlila Tradition 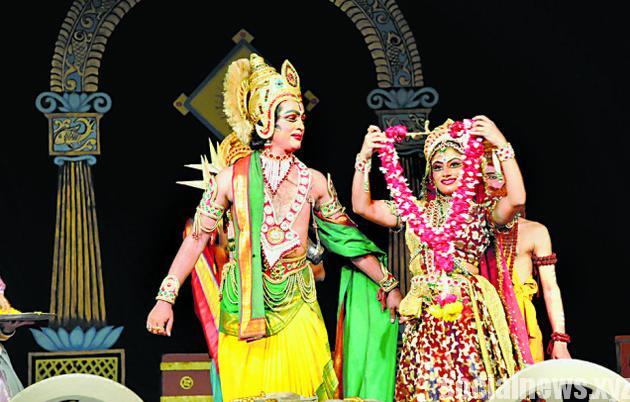 New Delhi, Oct 18 (IANS) The traditional Ramlila is being sought to be given a touch of Bollywood glamour to draw the hip generation.

In the run-up to Dussehra, celebrities like Asrani, Zarina Wahab, Shakti Kapoor, Gajendra Chauhan and Surendra Pal came forward in a bid to entertain fans and "rejuvenate" what many organizers are calling a "sinking" cultural tradition.

While people are used to seeing local artists portraying Ram, Laxman, Sita and Ravan with oodles of make-up and flashy clothes, they are now getting to witness B-town actors taking centerstage at Ramlila exhibits. This year 30 Bollywood celebrities like Rupa Dutta, Manoj Tiwari, Dolly Bindra, Rati Agnihotri, Raza Murad, Puneet Issar, Girija Shankar and Upasana Singh, among others, joined the Lav Kush Ramlila at the Red Fort here to provide viewers a whole new experience and astonish them with different portrayals of the Ramayana's characters.

Surendra, best known for his role as Tamraj Kilvish in the popular TV show "Shaktiman", is currently playing the role of Ravan in the Lav Kush Ramlila.

"Ramlila is part of our culture and heritage, but it is slowly vanishing. Nowadays, people are more and more getting connected to films and TV. As such, our ancient culture is getting extinct.

"We don't want India's traditions to move out of the limelight. We are here to rejuvenate this tradition and with this effort we want to remove all that is wrong in society," Surendra told IANS.

The actor said he never thought the young generation "would skip shows like 'Bigg Boss' to see us perform live on stage."

Actor and BJP member Gajendra Chauhan, at the eye of a storm after being named the head of the prestigious FTII in Pune - who essayed lord Shiva in the Ramlila - said he was really "excited" to perform in his hometown.

"It was a one-day job for me because I requested the organisers to give me a short and smaller role, which was just for a day introducing the Ramlila. It was a different experience performing live onstage. I have been performing onstage in Mumbai for a long time," Chauhan told IANS.

"With Hema (Malini), I have continuously performed for 19 years on stage. But to perform in front of my city's people, I was very excited. Also playing a god is a very challenging thing," he added.

Chauhan, who has been in the spotlight since his appointment as chairman of the Film and Television Institute of India (FTII) in June, says it's the "first time that Bollywood actors have been called in for Ramlila, and he feels it "is good for the actors as well as the audience."

With the involvement of celebrities in Ramlila, has there been a surge in the number of attendees?

"Till now we have received a very good response with 100 percent occupancy and more. It's much better than last year; so for that, the credit goes to these artists. Not only the artists, we have also brought in Vishnu Patel, who designed costumes for B.R. Chopra's 'Mahabharat'," Ashok Aggarwal, president of the Lav Kush Ramlila Committee, told IANS.

Aggarwal said that the motive this year was to gain familiarity amongst youngsters as they aren't too keen to watch Ramlila.

"We wanted to gain attention from youth this time and to a great extent they have made a comeback to the Ramlila ground. As compared to older age groups, this time we have witnessed big footfalls from youth like college and school students," Aggarwal added.

As the 10-day-long Ramilia heads towards its conclusion on Dussehra, the organisers promise that just like they surprised viewers with Bollywood celebrities at the opening Ramlila stages, viewers can expect more fun and entertainment towards the end.