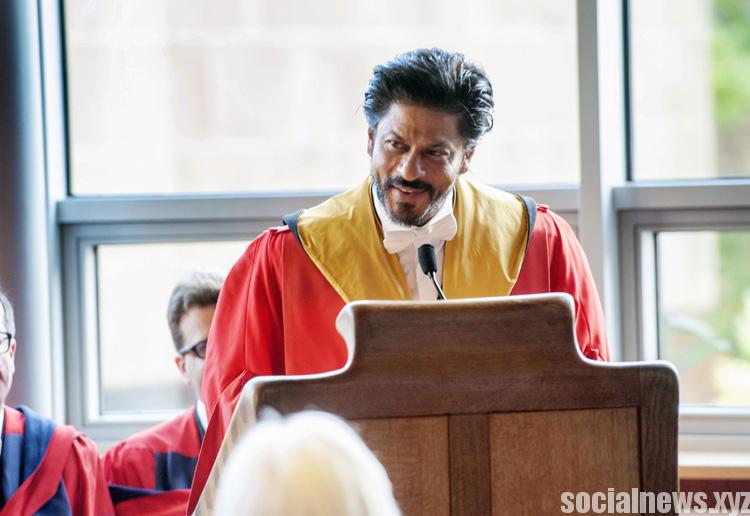 Edinburgh, Oct 16 (IANS) After receiving an honorary degree from the University of Edinburgh here, Indian superstar Shah Rukh Khan went on to dole out "life lessons" to the students in Bollywood style.

He said his journey in showbiz has instilled some jewels of wisdom in him, and added that the "film titles have formulated all that I believe one should pass on as life lessons".

Starting his journey from Indian television, Shah Rukh took a plunge in Hindi films in the early 1990s and soon emerged as Bollywood's "Baadshah" and the "King of Romance". He is credited for hit films like "Baazigar", "Darr", "Kuch Kuch Hota Hai", "Kal Ho Naa Ho" and "Don".

He received the degree of Doctor Honoris Causa from the University Chancellor, HRH The Princess Royal, in Edinburgh. The actor was presented with the degree in recognition of his outstanding record of philanthropy, altruism and humanitarianism and his global reach as an actor, read a statement.

Be it overcoming fear, daring to walk the road less travelled or living from heart and spreading love, Shah Rukh has learnt the way to live life through Hindi films.

"One of the first movies of my career was a movie called 'Deewana'. So here's my first life lesson, inspired by the movie title 'Deewana' - Madness (of the particularly nice or romantic kind) is an absolute prerequisite to a happy and successful life," Shah Rukh said while addressing students.

He added: "Soon after I acted in 'Deewana', I became the hapless hero of a movie called 'Chamatkar'... All you have to do is fall asleep! In other words, no matter how bad it gets, life is the miracle you are searching for. There is no other one around the corner."

Shah Rukh has also explored the negative realms of cinema by playing anti-hero in films like "Darr" and "Baazigar". He said he went against the wave and tried to break stereotypes of Indian films.

"Few actors would have willingly switched from romantic heroes to obsessively violent lovers. I took the leap...'Darr' means fear in Hindi...Don't let your fears become boxes that enclose you. Open them out, feel them and turn them into the greatest courage you are capable of," the actor said.

He ended on a filmy note with a dialogue from his "Om Shanti Om" - "Like in Hindi films, in real life too everything ends well. And if it doesn't, then that's not the end...picture abhi baaki hai, mere doston."

Chhapra: People gather to look during a rescue operation #Gallery

Chhapra: Police personnel and firefighters during a rescue operation as six people died after a house collapsed due to a blast #Gallery

Patna: Candidates wait in a queue to appear for the Agniveer Armed Forces recruitment exam #Gallery

Chhapra: Police personnel carry a body during a rescue operation as six people died after a house collapsed due to a blast #Gallery

Chhapra: Police personnel during a rescue operation as six people died after a house collapsed due to a blast #Gallery

: Bhopal: Passengers wait to board a train at a railway station during heavy rain #Gallery

: Bharatpur: Candidates come out after appearing in the REET exam #Gallery

Scuffle breaks out in Kashi Vishwanath temple over darshan

Will donors still back Trump for the 2024 presidential run?