Amritsar, Oct 3 (IANS) Over 10,000 students in this Sikh holy city on Saturday staked their claim in the Guinness World Records with the largest dance performance in one place.

Organisers said the students at the historic Khalsa College campus here in Punjab also took a pledge against drug abuse. 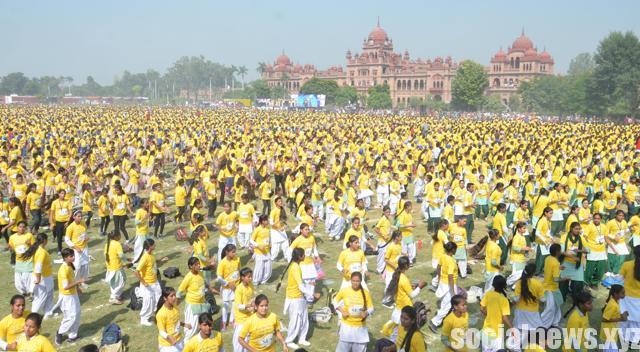 "Shake your legs, Keep away from drugs" was the theme of the dance performance, organised by the Sun Foundation and the Amritsar district administration.

"The entire event was monitored by 10 CCTV cameras and judged by 200 judges for a five-minute synchronised performance by the largest gathering of participants. The performance was choreographed by prominent choreographers Pankaj and Preeti. Former Indian cricketer Bishan Singh Bedi was also present," an organiser said.

Amritsar Deputy Commissioner Ravi Bhagat, the man behind the initiative, said the mega event will give a fillip to the ongoing anti-drugs campaign in the state.

Organisers said that in 2012, 4,400 children had gathered in Mumbai and registered the then world record for the largest dance performance.